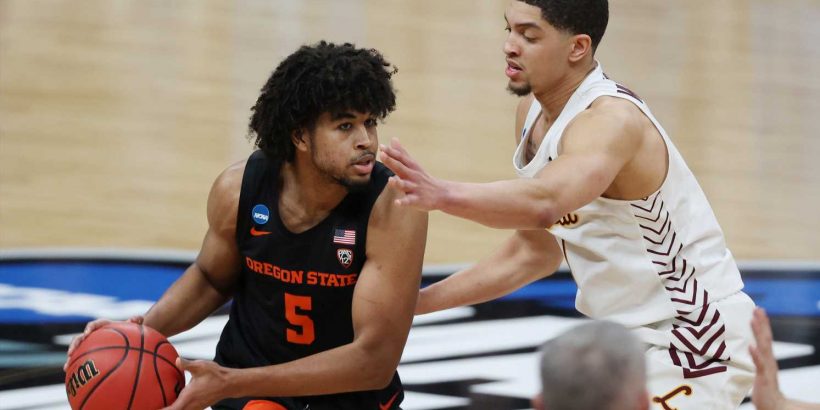 Not every men's NCAA Tournament game is a masterpiece. Sometimes the frequency of games during the first and second rounds helps paper over the clunkers.

Sadly, there was no other game going when Oregon State and Loyola Chicago opened the Sweet 16 Saturday with the 12th-seeded Beavers pulling off a 65-58 defeat of the No. 8 Ramblers.

With the schedule changed due to the coronavirus pandemic, each game had its own window, so there was no ability to look away.

Oregon State led after the first half 24-16 with just 12 made field goals to celebrate.

The Beavers shot 33% in the first half, making just 8-of-24 attempts. That was spectacular compared to the Ramblers, who were 4 for 23 (17.4%). Throw out Cameron Krutwig hitting 3 of 5 and there was just one field goal among the other eight Loyola players to see action before intermission.

Some of the offensive struggles Saturday could have been predicted.

Loyola entered leading the nation by allowing just 55.8 points per game. Its deliberate style also doesn't lend itself to high-scoring games. Oregon State's zone defense — with its length and athleticism — caused troubles for the Ramblers.

Even with the matchup challenges, the situation for each team was drastically different than most years. Both high seeds, they were coming off huge performances in the first two rounds. Oregon State took down both Tennessee and Oklahoma State and was in the Sweet 16 for the first time since 1982. Loyola knocked off No. 1 Illinois, an in-state rival, and was being talked about as a Final Four contender.

Adding a further layer: Both teams were stuck in Indianapolis for five days after the games. The time between games was one day longer than usual, and instead of any normalcy to their routines and a mental break, they've mostly been stuck indoors, with limited contact even with teammates.

It would be natural for these college-age kids to feel an unnatural blend of excitement and anxiety before taking the court.

Things improved in the second half as the teams played more relaxed. At the first media timeout, there already were 15 points scored, almost equaling Loyola's first-half output. It was mostly the Beavers who found their rhythm, grabbing a 13-point lead before holding off the Ramblers' efforts to rally. In doing so, they became only the second No. 12 seed to reach the regional final.

Years from now, there won't be an asterisk on this historic achievement for the Beavers. As ugly as the game might have been, it was a thing of beauty for a team now one win away from the school's first Final Four since 1963.