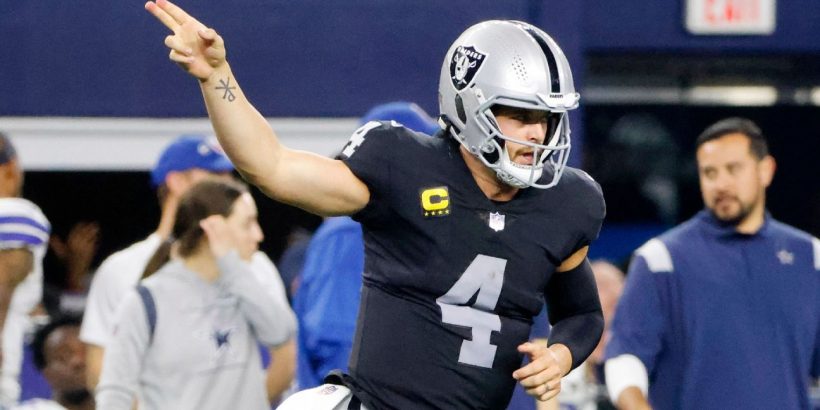 Week 12 of the 2021 NFL season began on Thursday with the Chicago Bears and embattled coach Matt Nagy winning on the final play of the game over the winless Detroit Lions.

The afternoon saw the Las Vegas Raiders break a three-game losing streak and keep themselves in the thick of the AFC playoff race with an overtime win over the Dallas Cowboys, who have suddenly dropped three of four after a 6-1 start. The Buffalo Bills got back on the winning track in the nightcap with a dominating win over the New Orleans Saints.

Our NFL Nation reporters react with the takeaways and lingering questions. Plus, they each look at the bigger picture with their current team confidence rating — a 0-10 grade of how they feel about each team’s outlook coming out of the week. Let’s get to it.

What to know: The Bills had another dominating victory without playing their best football. Quarterback Josh Allen threw two interceptions, including the first of his career in the red zone, but also finished the game with a career-high 82.1% completion rate. In a way, it is representative of a Bills’ season that has featured inconsistent play but, at 7-4, still has them primed for an AFC East fight with the New England Patriots down the stretch. A large part of that success has come courtesy of the Bills defense that has now limited five opponents to 12 points or less. All three phases had success, with coach Sean McDermott even giving special recognition to the kickoff coverage after the game. When the Bills are rolling like this, they are hard to beat. Doing so consistently is the key. — Alaina Getzenberg

What is the impact on this defense if cornerback Tre’Davious White misses significant time? White left the game with a knee injury in the second quarter and did not return. Coach Sean McDermott said that they would know more about the injury in the coming days. Backup Dane Jackson filled in for White and played well overall, but there is no one on the roster that can sub in for the All-Pro corner, who is among the top five coverage corners in the league this season, per Next Gen stats. “[White’s] such a great teammate,” Allen said. “He talks to everybody the right way. He just does the little things well that not many people see, but that’s why he’s so good.” If he is out for multiple weeks or even the season, the Bills’ mighty defense — which has only allowed eight passing touchdowns this season (fewest in the league) — will take a hit, but should be able to adapt to an extent under coordinator Leslie Frazier. — Getzenberg

Getzenberg’s confidence rating (0-10): 7.9, up from 7.2. The roller coaster continues, but the Bills put together an all-around dominant win — even though it was against a banged-up team — on a short week and showed an ability to continue to bounce back from tough losses, although stacking wins will be required to stretch this rating.

What to know: It’s getting uglier by the week for the Saints and their depleted offense — now 0-4 since Trevor Siemian replaced the injured Jameis Winston at QB. They were also without RBs Alvin Kamara and Mark Ingram II and RT Ryan Ramczyk on Thanksgiving night, and the replacements weren’t nearly good enough. They could all be back by next Thursday against Dallas — and the Saints could consider a QB change to Taysom Hill. But at 5-6, they’re dangerously close to “too little, too late.” — Mike Triplett

New week, same question: Will they consider a switch to Hill at QB? Siemian’s performance has regressed each week after a promising start. And even though Sean Payton made it clear he was one of many problems on a night when the Saints also couldn’t run, pass protect or return kicks, Payton acknowledged, “We’ll look at everything right now. Obviously we have to.” But Hill has been limited by a foot injury since Week 10 (which is why he has been relegated to the emergency backup role the past two weeks). But he practiced fully this week, so his role must expand ASAP in one form or another. — Triplett

Triplett’s confidence rating (0-10): 4.5, down from 5.5. A full-point drop for the second straight week. We know a better version of this team exists after their 5-2 start. But even their Week 8 win over the Buccaneers, when Winston left in the second quarter, feels like a distant memory.

What to know: The Raiders are not done. Not yet, anyway. As receiver Hunter Renfrow said, “I felt like we showed the heart of the team today.” Indeed, it was as close to a must-win situation as one could get, and in ending a three-game post-bye losing streak, the Raiders improved to 6-5. “But I think we felt it a little bit [because] 5-6 is a whole lot worse than 6-5,” Renfrow added. “And, to beat a good Cowboys team, on Thanksgiving, in prime time, it gives us a lot of confidence going forward … we have a long road ahead of us, but we took a step in the right direction today.” — Paul Gutierrez

Is DeSean Jackson truly a part of the offense now? He better be. Not only did he take the top off the defense with three catches for 102 yards, including a vintage 56-yard catch-and-run TD down the left sideline, Jackson’s mere presence opened things up underneath for the likes of Renfrow, who had eight catches for a game-high 134 yards. And with another 10 days before Las Vegas’ next game, Jackson, who turns 35 next week, has that much more time to marinate in the Raiders’ system. “It sure is fun to throw him the ball,” said quarterback Derek Carr. — Gutierrez

Gutierrez’s confidence rating (0-10): 7.5, up from 5.5. A full two-point jump from last week’s nadir? Sure, when you take into account how much the NFL truly is a week-to-week season. Beating the heavily-favored Cowboys on the road and in prime time should be a huge confidence boost. The Raiders also getting their running game going to the tune of 143 yards is a good omen as well, especially Josh Jacobs going for 87 yards on 22 carries. Stay tuned, though, for an update on Pro Bowl tight end Darren Waller’s injured left knee.

What to know: The Cowboys have lost three of four and two straight following their overtime loss to the Las Vegas Raiders. The offense could not get going until the fourth quarter. The defense allowed too many big plays. Complaining about the officials is pointless. Simply, the Cowboys need to play better. Ezekiel Elliott was asked if this team has lost its swagger. “No,” he said, adding, “Just gotta focus. We gotta go get better, we gotta go fix what happened today and become a better team by next week.” — Todd Archer

How can the Cowboys limit the penalties? The best hope is to not have Shawn Hochuli’s crew again the rest of the way, but penalties have been an issue all season. They have been flagged at least seven times in eight games this season, including 14 for 166 yards against the Raiders. Micah Parsons said he doesn’t want to see the defense change its play style. There is a fine line between being aggressive and careless. Bill Parcells used to say he doesn’t coach penalties. No coach does, but this is an issue that needs to be rectified. “We’ve got to self-reflect and keep the officials out of the game,” Dak Prescott said. “One way or another, we’ve got to be better.” — Archer

Archer’s confidence rating (0-10): 7.9, down from 8.4. They can talk about the returns of Amari Cooper, CeeDee Lamb, DeMarcus Lawrence and Randy Gregory all they want, but there is something off with the team at the moment. The offense can’t get the run game going. The defense can’t stop allowing big plays. They have to turn this around quickly.

What to know: Andy Dalton played well in relief of Justin Fields. The 34-year-old became the first Bears quarterback to pass for 300-plus yards (317 vs. the Lions) since Nick Foles in Week 9 of last year. Dalton led Chicago on an 18-play drive to set up Cairo Santos’ game-winning 28-yard field goal. Dalton played with poise and confidence — exactly what you’d expect from a player with that level of experience. Fields is expected to reclaim the starting job when his ribs heal, but Dalton proved on Thanksgiving that he can still get the job done. — Jeff Dickerson

Are the Bears going to fire coach Matt Nagy? No. Or, rather, not yet. The Bears have never fired a head coach during a season in the history of the franchise. The Bears let Marc Trestman finish out his final season. Same with John Fox. Nagy was named coach of the year three years ago. He’s led the Bears to the playoffs in two of his three seasons. Nagy deserves better. Ultimately, he may get fired after the season, but there’s still a lot of football left to play. Hopefully, Thursday’s win over Detroit allows Nagy and the Bears to regroup before a tough game versus Arizona on Dec. 5. — Dickerson

What to know: The Detroit Lions suffered yet another heartbreaking loss, falling to 0-10-1 after a third loss this season on a walk-off field goal. It happened in Week 3 against the Baltimore Ravens, then again Week 5 vs. the Minnesota Vikings and now on Thanksgiving against the Chicago Bears. Bears kicker Cairo Santos made the 28-yard field goal to bury the Lions Thursday. — Eric Woodyard

Should the Lions be worried about coach Dan Campbell’s playcalling? Certainly. The Lions got off to a hot start Thursday with quarterback Jared Goff finding an early groove, completing his first five passes, but the conservative trend of short passes and short gains since Dan Campbell took over playcalling from offensive coordinator Anthony Lynn in Week 10 continued in front of the national audience, with some fans even booing inside Ford Field. Campbell may want to consider letting Lynn take back playcalling responsibilities if the team wants to win a game. — Woodyard

Woodyard’s confidence rating (0-10): 2, down from 2.3. As always, the Lions play hard but penalties and mistakes are too much to overcome since they don’t have enough skill players to bail them out.