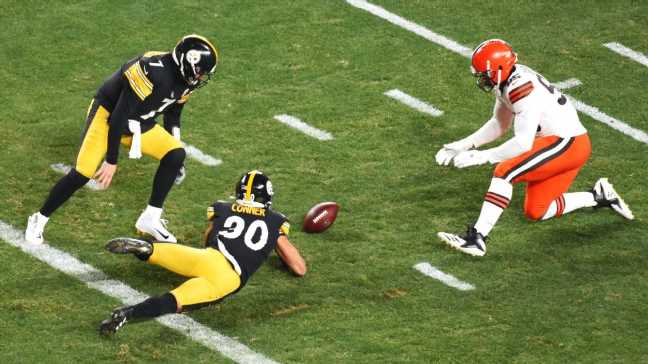 The start to the Cleveland Browns’ first playoff game in 18 years couldn’t have gone more perfectly on Sunday night.

On the first play of the game, Pittsburgh Steelers center Maurkice Pouncey snapped the ball over the head of quarterback Ben Roethlisberger. After a scramble for the ball, Cleveland’s Karl Joseph recovered it in the end zone, giving the Browns a 7-0 lead just 14 seconds into their wild-card playoff game.

According to ESPN Stats & Info, the last time the first play from scrimmage resulted in a defensive touchdown in any game came in Week 1 of 2018, when Sam Darnold threw a pick-six on his first career pass with the New York Jets.

It didn’t take long for the Browns to add to it. M.J. Stewart intercepted Roethlisberger on the ensuing drive, and Baker Mayfield made the Steelers pay with a 40-yard touchdown strike to Jarvis Landry. It was the first time the Browns scored 14 points in the first quarter against the Steelers since 2000, a game the Browns went on to win.

It’s also the first time the Browns have scored 14 points in the first quarter of a playoff game since the 1954 NFL Championship when they defeated the Lions 56-10 (they led 14-3 at the end of the first quarter).

The start shocked a few notable names on social media: