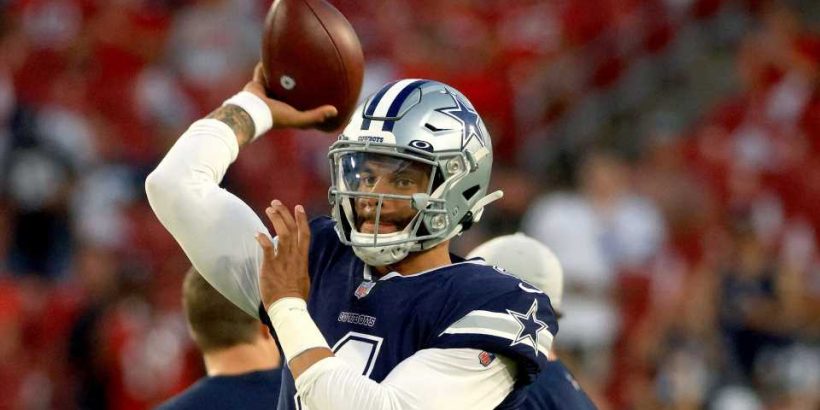 Is Dak really back?

Cowboys quarterback Dak Prescott made his return to the field Thursday night, starting his 2021 NFL season with a matchup against the Buccaneers in Tampa. While his first-half stat line looked just fine (23-of-32 passing, 224 yards, two touchdowns), viewers noted that something was very off with his throws.

Several looked uncharacteristically wayward from the otherwise accurate and strong-armed Prescott, especially early in the game. There were questionable throws to CeeDee Lamb — one of which resulted in a drop — and deep misfires that had viewers nervous.

He also appeared to lack velocity on several throws.

On Prescott’s 22-yard touchdown pass to Lamb in the first quarter, the Dallas wideout had to slow up to catch the ball, which was ever so slightly underthrown:

There might be a reason for that: Prescott is dealing with a right lat injury that sidelined him during training camp. He is scheduled to receive MRIs once every two weeks to see if the lat and his throwing shoulder are holding up OK as the season progresses.

The NBC broadcast also noted that Prescott has a new pregame warmup routine that is focused on flexibility and loosening the arm, similar to what an MLB pitcher would do.

Prescott’s first-half performance kept the Cowboys in striking distance — they trailed 21-16 at intermission — but analysts, fans and viewers stated that something going on with his arm:

Prescott then threw an interception midway through the third quarter on an intermediate throw over the middle that was wide of Lamb, who ended up tipping the ball. The Bucs converted the turnover into a touchdown and a 28-19 lead.

Is it rust? Is it recovery from injury? Who knows?

But hopefully for the Cowboys, they aren’t bucked by this turn of events.