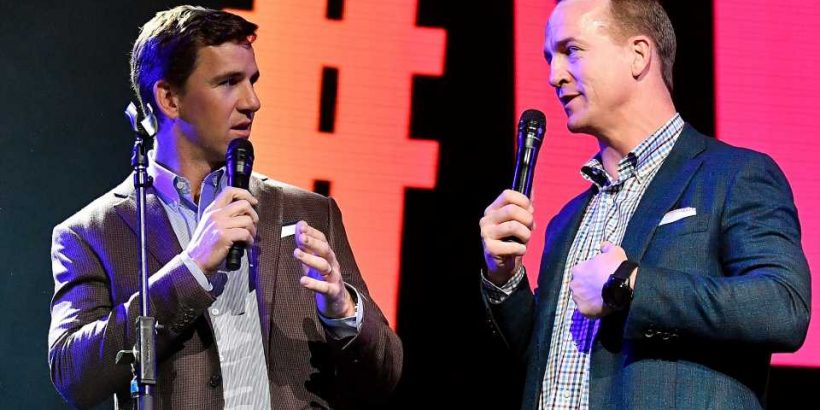 Most ESPN MegaCasts have been “meh casts” when trying to find a compelling alternative broadcast version of a major sporting event the network covers. The “Manning Cast” of ‘Monday Night Football’ is must-see TV, every week.

Unfortunately, we can only watch Peyton and Eli Manning watch and react to ‘MNF’ for nine more games this season. As part of their agreement, however, we will get the beloved multiple Super Bowl-winning brothers 30 times in the next three seasons. ESPN needs to get to work on an extension to that, stat.

There’s no need to dig for a critical review of what the Mannings brought to a live NFL game. If you’ve seen everything they’ve done, from ESPN ads to DirecTV musical skits to Nationwide spots to producing quiz shows, you should know they are always a mega-hit because of their combined intelligence and humor. The only thing we didn’t expect is how the Mannings even exceeded our high expectations during their Week 1 debut.

It helped to get a crazy overtime game between the Ravens and Raiders in raucous Las Vegas to give the Mannings great, extended content. Charles Barkley was a fine early cameo to bring more chuckles, but then the show got next level when two active superstars — Chiefs tight end Travis Kelce and the Seahawks quarterback Russell Wilson — made extended appearances.

While we wait for Peyton and Eli to officially form a three-man booth with brother Cooper to make our dream of all-around “Manning Night Football” come true, we will take this version and keep on loving it.

When it was Peyton and Cooper on screen together on “College Bowl,” Peyton was the straight question-asking man and Cooper was comic relief. The beauty of the Mannings is they can play either role at any time.

We got their brother jokes about how big Peyton’s forehead is and how slow Eli of a runner is. You also got the former quarterbacks trying to get into the mind of current quarterbacks Lamar Jackson and Derek Carr and also break down all the key decisions by coaches John Harbaugh and Jon Gruden.

In one of the many amusing moments, Peyton even decided to take it a step further by role-playing Gruden during the telecast to help the viewers understand more about offense, in total Gruden ‘MNF’ style.

There was wire-to-wire fun. Barkley brought his typical Barkley, like he had just walked off the “Inside the NBA” set, showing the same Kenny Smith chemistry with the Mannings. Kelce gave an important perspective with two fellow top tight ends, Darren Waller and Mark Andrews, in the game. He was a smart A-list get, knowing his Chiefs will be playing the Ravens in Baltimore next Sunday night.

Then it went to a next level with Wilson right there to break down the fourth quarter and overtime. Wilson looked like he had his own future in television with his complementary observations and insight. The Mannings brought out his personality, which is easier said than done. Wilson, who had his own crazy ending in a big Super Bowl like Eli, was in the right place in the right time to also react to the Ravens-Raiders unbelievable ending.

When watching the Mannings and only the Mannings on “Monday Night Football,” there was no thought of what was being missed on ESPN with the regular crew of Steve Levy, Brian Griese and Louis Riddick. The Manning MegaCast had it all and then some. It had the feel of a beta test, with the network creating a complementary show that’s competition for the main one to perhaps see if it can convince the Mannings to do this full time, still on their terms.

Traditional sports viewing is fine, but it’s 2021, when we have Nickelodeon doing NFL playoff games. The Mannings are breaking convention in their newest medium. To reach a casual audience who are staying more for what the Mannings are saying than who’s playing on MNF, it was perfect. There was some of that raw “YouTok or TikTube” vibes that the kids love, but also the polish of the Mannings for more mature and less cavalier football watchers.

With the Mannings, you get the most comprehensive and modern experience possible. If you’re not watching them when they’re doing MNF, you would be a lot less entertained and informed.

At the end of an amazing Manning night of unscripted football fun, it was only natural a fire alarm went off in Eli’s quarters. The Mannings were burning it up all night, and they will continue to burn brighter than the “real” ESPN MNF telecast whenever they get their chance to do so.