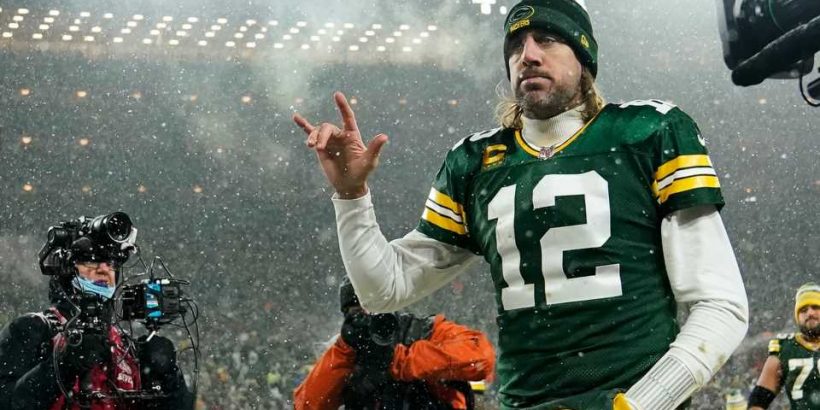 Has Aaron Rodgers already played in his final NFL game?

The Packers’ loss to the 49ers in Saturday’s NFC playoff matchup unsurprisingly sparked more rumors about Rodgers’ future. Green Bay’s front office and coaching staff want the MVP candidate to return to the team for the 2022 season, but Rodgers previously indicated he will consider requesting a trade or retiring from the NFL in addition to staying with the Packers.

Now that his 2021 campaign has abruptly ended, Rodgers must evaluate all of his options sooner than he though— but he intends to do so quickly. During his Tuesday appearance on “The Pat McAfee Show,” Rodgers told McAfee and A.J. Hawk this would not be a “long, drawn-out process.” He plans to speak with Packers general manager Brian Gutekunst soon, and he intends to make a final decision before free agency begins.

What is going through Rodgers’ head as he deals with the aftermath of another disappointing playoff loss and contemplates his next move? Here are some of his most notable responses from the interview.

“So, it comes down to more just how you’re feeling. Can you still play? Do you still have the same commitment and enjoyment with the game? And do you want to sign up for the grind again? I think the only way of knowing that is to probably get away from it for a little bit, let your mind clear and then think about it.”

Aaron Rodgers on retiring from the NFL, then making a comeback

“One thing I would not do, 100 percent would not do, is retire and then come back a year later. That’s just — I don’t have any desire to do that. That makes no sense. I feel like I’m at the place relationally with the Packers, in a really good place, especially with Brian and the way our friendship and trust has grown… where it would be a simple conversation. And whatever comes out of that conversation, moving forward, there’s not gonna be a weird standoff, war of silence or anything.”

Aaron Rodgers on the options in front of him

“I don’t think [free agency is] an option, but everything is definitely on the table. There are things that seem more plausible or more likely, which I won’t necessarily get into. The most important thing is, first, the commitment to playing and to going through the offseason and training and all that stuff. [That’s] the first [thing]. And then, after that, it’s conversations with my agent and Brian and looking at the desires of the team, kind of the mindset moving forward. Then, make a decision from there.”

Aaron Rodgers on the difficulty of making a final decision

“I think it’s just a trust that I’ll know exactly what to do. Then, once you make the decision, that’s the decision, and you’re moving forward. Until you get to that certainty, you don’t make a decision. There also is a timeframe for this because I understand that my decision does impact a number of other people’s decisions, and I want to be very sensitive to that. I’ll definitely make a decision sooner rather than later.”

You can watch the full interview below. (Rodgers’ segment begins around the 2:06 mark.)