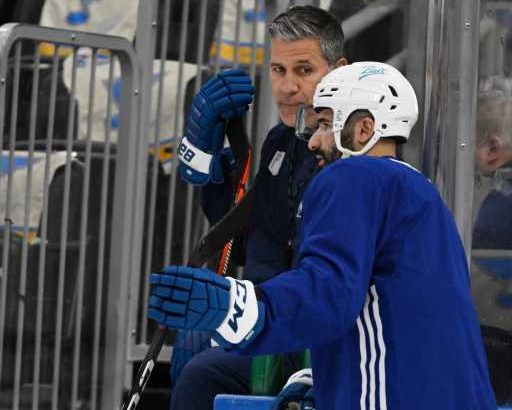 ST. LOUIS — Avalanche captain Gabe Landeskog was outspoken about the threats to teammate Nazem Kadri ahead of Game 4 on Monday. At the same time, the St. Louis Blues had nothing or little to say about the situation that has local police investigating and the NHL involved.

“It’s very sad,” Landeskog said after a morning skate in which he was the only Avs player who didn’t participate. “But at the end of the day, we’re in the public eye and anything that we do is seen from the outside and it can be judged however it wants. Unfortunately, people think they have the freedom to say and do whatever they want. But we always have security and this is no different. We’re focused on the big Game 4 here tonight. That’s really our main goal.”

In the Blues’ pressroom, head coach Craig Berube declined to comment about the threats to Kadri, whom Blues fans blame for the injury to starting goalie Jordan Binnington early in Game 3. Colorado went on to score four goals on backup Ville Husso and win 5-2 to take a 2-1 series lead. Binnington on Sunday was ruled out for the rest of the series.

Landeskog would like the Blues to help defuse the public anger towards Kadri. He says Kadri’s contact in the crease with Binnington was the result of a loose puck in his battle with St. Louis defenseman Calle Rosen. Rosen appeared to push Kadri into Binnington.

There was no penalty on the play and the NHL said the Department of Player Safety cleared Kadri of any wrongdoing.

“At the end of the day, it’s a loose puck and he’s going for it. The fact that this is a conversation is kind of crazy to me, but it’s the way they want it,” Landeskog said.

“We don’t want that happening, obviously, but hopefully it’s been taken care of. I’ll just leave it at that,” he said.

Avalanche coach Jared Bednar said he had “nothing” to say about the threats before he was asked if it’s sad and unfortunate.

“Two good words to describe it,” he answered. “It’s unnecessary, really, that would be my third one.”

Landeskog does not believe Kadri — who was issued an eight-game suspension for a check to the head of St. Louis defenseman Justin Fault in last year’s playoffs — will be targeted on the ice by the Blues.

“It’s a playoff series. They’re trying to control the conversation and that’s fine. We’re here to play hockey,” Landeskog said. “I can’t imagine they’re going to spend any time on that or focus on that. This is a big game for both teams, so that’s really the bottom line.”

The Avs, meanwhile, move on without defenseman Sam Girard, who sustained a broken sternum on his first shift in Game 3. But Girard was back with the team on Monday and was spotted at the morning skate.

“He’s a little sore today but it’s good to see him up and about and in good spirits here with the guys, for sure,” Bednar said.

Jack Johnson is expected to replace Girard on the blueline and make his postseason debut with the Avs, but with rookie Bo Byram moving up to the second pairing with Josh Manson. Johnson, who played in 74 of 82 regular-season games, will likely play on the third pair with Erik Johnson.

Based on special teams’ practice at the morning skate, Byram will step in for Girard on the No. 2 power-play unit. Bednar, per usual, declined to identify his lineup but rookie forward Alex Newhook might step in for Andre Burakovsky or Nicolas Aube-Kubel and make his postseason debut. Burakovsky and Aube-Kubel have each played in the previous seven playoff games.