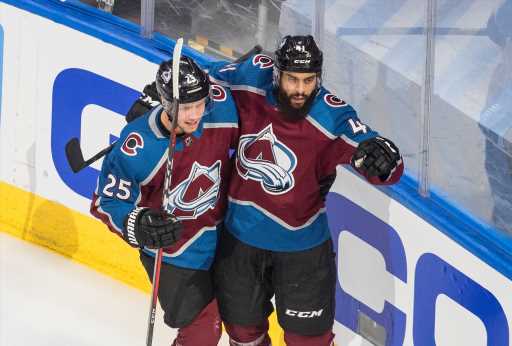 The Avalanche’s fourth line was its best trio Thursday night in a 5-1 victory over the Vegas Golden Knights at Ball Arena.

To begin a two-game set between the West Division giants, center Pierre-Edouard Bellemare and wingers J.T. Compher and Logan O’Connor were each plus-3 and the line had a hand in three goals. Bellemare and Compher scored and O’Connor had the primary assist on defenseman Cale Makar’s tally that gave Colorado a 3-1 lead midway through the second period.

“Just playing the right way. I thought that was a great game by that group,” Avs coach Jared Bednar said of the Bellemare line. “They definitely set the tone for our team and definitely had a large part in helping us get the win tonight.”

Compher assisted on Bellemare’s goal 3:54 into the third period that gave the Avs a 5-1 lead — Colorado’s fifth consecutive tally after trailing 1-0 early. Compher scored with a backhand for the second goal in the Avs’ four-goal second period.

“I thought we were effective tonight,” Compher said of his line, which combined for six shots. “We weren’t stingy with the puck. We got it deep, played to our strengths which is our speed and our tenacity. We were rewarded for it tonight.”

Added Bednar: “Outstanding. Great work ethic. All three of them skated real well tonight. Wasn’t fancy. Real disciplined with the puck, playing in behind their defense, getting up on the forecheck. Just tenacious and relentless on their puck pursuit, whether it was going forward to try to score or returning to try to break up their attack.”

The prettiest play of the night might have been O’Connor’s head-man feed to Makar in the neutral zone, allowing Makar to score on the breakaway. O’Connor, 24, and Makar, 22, are both from Calgary, and Makar grew up playing with and against O’Connor’s little brother, Owen.

“The goal — OC made a great play,” Makar said. “I was able to get some outside ice on the (defender) and OC made a great short chip pass to me. Just fortunate how it turned out.”

About the Calgary connection, Makar said: “I never really knew OC growing up, just cause he was older. I knew his younger brother. I think I played with Owen for a few years in spring hockey. Then I got to know their family a little bit — they own a suit shop in Calgary named (O’Connors Men’s and Women’s Clothing & Footwear) and they gave me my draft suit. So I got to know them a little bit then (and) it’s awesome to see OC here with us.”

Footnotes. The Avalanche has points in nine straight games (8-0-1) … Colorado is on a seven-game winning streak at home, the club’s longest since a 10-game stretch in 2017-18. … The Avs’ four goals in the second period mark the second time they have scored four times in a frame. They also did it on March 16 against Anaheim.