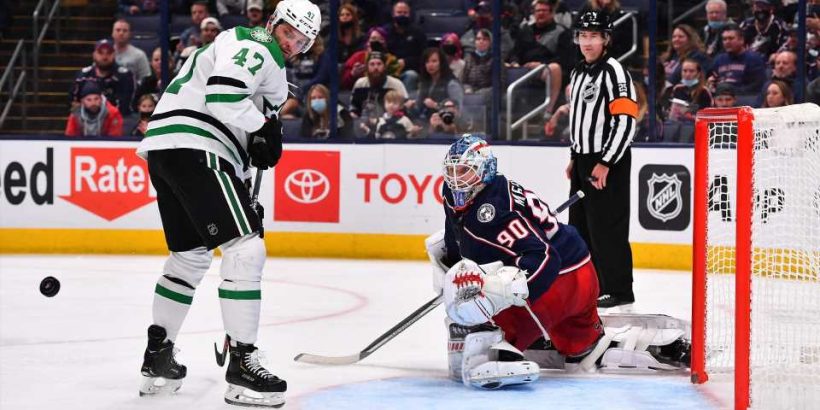 Blue Jackets goaltender Elvis Merzlikins wasn’t satisfied with allowing just one goal in a win over the Stars on Monday night. He wanted to keep Dallas off the board entirely.

He wasn’t motivated by anything the Stars’ players did, but rather a spectator in a Stars sweater who Merzlikins said made inappropriate comments before the game about Merzlikins’ late teammate and friend, Matiss Kivlenieks.

“I was expecting a shutout, because I believe in karma,” Merzlikins said after his team’s 4-1 victory, per The Athletic. “There are some stupid people in this world. It was really bad what happened in the tunnel when I was walking out (for warmups).” Merzlikins did not repeat what the spectator said.

Kivlenieks died July 4 from the trauma of a firework mortar blast. The Latvian goaltender was 24. Merzlikins, 27, witnessed the tragedy. The accidental explosion occurred at the Michigan home of Blue Jackets goaltending coach Manny Legace. Legace was hosting a celebration after the wedding of his daughter, Sabrina.

Merzlikins made 31 saves Monday and wasn’t beaten until Tyler Seguin scored at 17:41 of the third period. He also got help from a few posts — and, he believes, Kivlenieks.

“After the first period, the three posts I got, I really (firmly) believed in karma. I saw that (Kivlenieks) was really there,” Merzlikins said, per The Athletic’s Aaron Portzline.

Merzlikins wore Kivlenieks’ No. 80 for the Blue Jackets’ season opener Oct. 14, and the team hung a No. 80 banner over the ice. Columbus went on to beat Arizona 8-2, with Merzlikins making 36 saves. On Monday, Merzlikins improved to 4-0-0, lowered his goals-against average to 1.47 and raised his save percentage to .952.

His early play is right in line with a vow he made in September during a Q&A with Portzline.

“My plan is to win a Vezina Trophy. I’m gonna win a f—ing Vezina for (Kivlenieks),” Merzlikins said. “We can’t make promises because this is hockey and we don’t know how the season can go, but this is my goal. I believe I’m going to reach it. I’m not going to have any limits. I’m just gonna go all-in. Honestly, I don’t care, I’m going all-in for the Vezina.”