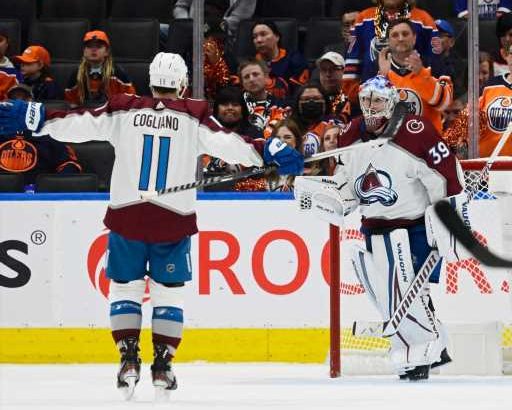 The Avalanche played 20 playoff games, winning 16 times to capture the Stanley Cup. It won in overtime five times. It won by a single goal six times. And it never lost consecutive games.

Over 54 days, the Avs created a lifetime of memories for players and coaches, executive and fans alike. Here are eight of those moments:

Backup goalie Pavel Francouz was thrust into duty in the first period when the stick of Predators forward Ryan Johansen went through Darcy Kuemper’s mask and injured his eye. Francouz, known as “Frankie” to everybody inside and outside the organization, stopped 18 of 20 shots in a 7-3 victory.

Two nights later, Francouz stopped 28 of 30 shots as the Avalanche swept its first-round series for the second consecutive year.

It was the first example of a team needing everybody to win the Cup. Francouz would end up starting four games and posting a 6-0 record in the playoffs, including a shutout of Edmonton in Game 2.

During the first round of the 2021 playoffs, Avalanche center Nazem Kadri was suspended for his reckless head hit on Blues defenseman Justin Faulk. Kadri secured his Public Enemy No. 1 status in St. Louis in Game 3 of this year’s matchup when he was pushed into Blues goalie Jordan Binnington, injuring him. After the game, while Kadri conducted a television interview, Binnington threw a water bottle in his direction.

Kadri was subjected to threats by fans to the point extra security was stationed at the Avalanche’s hotel. The best response? Score … and score … and score.

Kadri posted a hat trick in the Avalanche’s 6-3 Game 4 win, including two goals less than four minutes apart in the second period.

Two nights before, the Avalanche — up 3-1 in the series — squandered leads of 3-0 and 4-3, losing in overtime to the Blues. Back on the road, the Avalanche trailed 1-0 after the first period and 2-1 after the second.

No matter. Team Comeback (the Avs finished with 10 come-from-behind wins in the playoffs) received a second goal from J.T. Compher with 9:42 remaining, and with six seconds remaining in regulation, Darren Helm fired a shot that beat goalie Ville Husso.

The goal pushed this core of Avalanche players past the second round for the first time. Finally. It was also the start of a seven-game winning streak bridging three series.

The Avalanche led 7-3 late in the second period, but the Oilers scored the next three goals. The Avs sealed an 8-6 win on Gabe Landeskog’s empty-netter with 22 seconds remaining.

The Oilers and Avalanche scored one goal apiece in the first 36 minutes of the game, but then the ice opened up. Edmonton scored twice in 1:57 to take a 3-1 lead into the third period and led 4-2 with 16:05 remaining.

Cue an Avalanche burst. The Avs scored three goals in less than six minutes, capped by Mikko Rantanen’s marker with 5:13 left, to take a 6-5 lead. The Oilers forced overtime.

Only 79 seconds into OT, Artturi Lehkonen, one of four trade deadline period additions by the Avs, scored the winner. The Avs were back in the Stanley Cup Final for the first time in 21 years.

Nine days off between the end of the Edmonton series and the start of the Tampa Bay series didn’t bother the Avalanche, which led 3-1 after one period on goals by Gabe Landeskog, Valeri Nichushkin and Artturi Lehkonen.

But the Lightning, the two-time defending Cup champions, scored two second-period goals to tie the game.

At 1:23 of overtime, J.T. Compher’s shot was blocked by Tampa Bay’s Victor Hedman and bounced right to Andre Burakovsky, who scored on a one-timer.

“This was a dream since I was a kid,” Burakovsky said. “It feels amazing.”

Nazem Kadri had not played in 18 days since sustaining a broken thumb when he was checked from behind by Edmonton’s Evander Kane.

The Avalanche twice rallied from one-goal deficits — Nathan MacKinnon and Andrew Cogliano scored when the puck bounced in off their skate and shin guard, respectively.

Kadri scored the winner 12:02 into overtime when his shot was lodged into the upper part of the goal, causing an instant of confusion. The Lightning contended the Avalanche had too many men on the ice, but the play wasn’t subject to replay challenge.

“This is what I’ve been waiting for my whole life pretty much,” Kadri said.

In its second chance to clinch the Cup, the Avalanche fell behind 1-0 only 3:48 into the game. The Lightning did not score again.

Nathan MacKinnon and Artturi Lehkonen scored at the 1:54 and 12:28 marks of the second period, respectively, and then the Avalanche defense bucked down.

In what should be considered one of the finest close-out defensive performances in recent Cup Final history, the Avalanche held Tampa Bay without a shot for the first 10 minutes of the third period and allowed only four shots in the entire period. The Avs’ 2-1 win gave them their third Cup since moving to Denver in 1995.