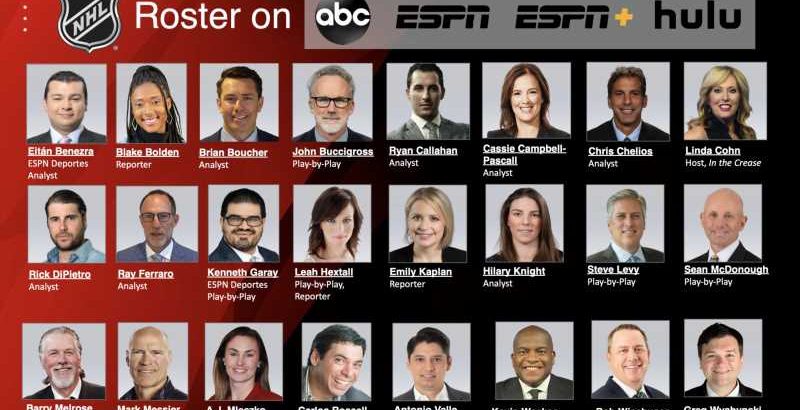 Cue the music, the NHL is back on ESPN!

After a 17-year hiatus, hockey will be hitting the airwaves once again at the worldwide leader. And, unlike the last time the company covered the fastest game on earth way back in 2004, they will also be live streaming the action.

Here’s everything you need to know to about hockey’s return to ESPN.

Back in March, the network  announced that they acquired the rights  for the next seven seasons, with ESPN networks airing 25 exclusive national regular-season games on ABC or ESPN.

Taking over for NHL.tv, ESPN+ will be streaming more than 1,000 games per season in addition to being the exclusive home of 75 national regular-season games that will be on ESPN+ and Hulu. Be forewarned: blackout rules do apply.

ABC/ESPN will air the All-Star Game and Skills competition for the next seven years. The 2022 All-Star Weekend will be held in Las Vegas on Feb. 4-5. The Olympic break officially starts as soon as the final horn sounds at T-Mobile Arena.

Who are the announcers for NHL on ESPN?

What are ESPN’s NHL studio shows?

“The Point”: Hosted by John Buccigross, the show will air Thursdays at 3 p.m. ET on ESPN2. During the first week of the NHL season, it will air Tuesday-Friday on ESPN.

“If ‘NHL 2Night’ had a child it would be ‘The Point.’ Like any good parent, our goal is to make this hockey kid even better than its parents. Stoked to get going,” said Buccigross.

“In the Crease”: Available on ESPN+, the show is hosted by Linda Cohen and Barry Melrose postgame.

ESPN will televise games nationally on Tuesdays and Thursdays throughout the season. On opening night, ESPN will have a doubleheader of games.

At 7:30 p.m. ET, the Lightning will raise their latest Stanley Cup banner and host the Penguins. Sean McDonough will do the play-by-play alongside analyst Ray Ferraro and rinkside reporter Emily Kaplan. Steve Levy will host the studio coverage with analysts Mark Messier, Chris Chelios and Barry Melrose.

In the night capper, the Golden Knights will host the Kraken in their first-ever game at 10 p.m. ET. Play-by-play will be done by John Buccigross with analyst Brian Boucher and rinkside reporter AJ Mleczko. Linda Cohn and Kevin Weekes will be in studio.

The following games will also be on ESPN+ :