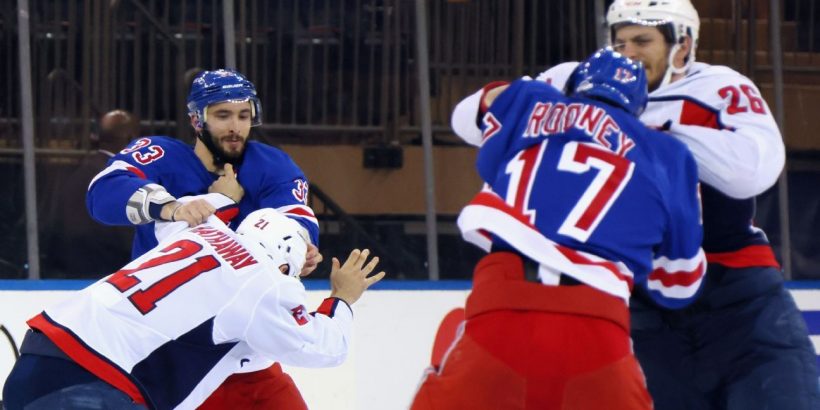 The New York Rangers and Washington Capitals combined for 72 penalty minutes in the first 4:14 of their game on Wednesday night, their first meeting after Capitals forward Tom Wilson injured Rangers star Artemi Panarin earlier this week.

There were six separate fights to start the game, including a line brawl one second after the opening faceoff. Both teams put out forwards from their bottom six to open the game. For the Capitals, it was Nic Dowd, Carl Hagelin and Garnet Hathaway fighting the Rangers’ Kevin Rooney, Colin Blackwell and Phillip Di Giuseppe respectively.

Rangers defenseman Brendan Smith then fought Wilson on the Capitals forward’s first shift, 50 seconds in the game. Smith was given an instigator minor penalty and a 10-minute misconduct. Wilson was held out of the Capitals’ lineup after the first period with an upper body injury.

There were two more fights at 4:14 of the first period, with the Capitals’ Lars Eller fighting Ryan Strome and Michael Raffl fighting the Rangers’ Anthony Bitetto.

The first period ended with the teams combining for 100 penalty minutes. That included a 10-minute misconduct handed to Wilson later in the period. There was no score.

All of this happened in the aftermath of Wilson’s antics on Monday. The controversial winger, who has been suspended five times by the NHL, was fined $5,000 by the NHL for punching Rangers forward Pavel Buchnevich in the back of the head while he was face-down on the ice. In the second period on Wednesday, Buchnevich was given a game misconduct for a cross-check.

On Monday, after Panarin jumped on his back to break up another altercation, Wilson threw the Rangers winger down to the ice. The Rangers said Panarin suffered a lower body injury on the play and would miss the team’s final three games of the season.

After the NHL Department of Player Safety opted not to suspend Wilson, the Rangers released a statement blasting the NHL and calling for the job of department head George Parros. Multiple sources have told ESPN that the statement was commissioned by Rangers owner James Dolan.

For the Rangers, the chaos on the ice was matched by the chaos off the ice for the team on Wednesday. New York shocked the hockey world by announcing that general manager Jeff Gorton, the architect of their rebuild, and team president John Davidson “are leaving the organization.” Associate general manager Chris Drury was promoted to president and general manager of the team.