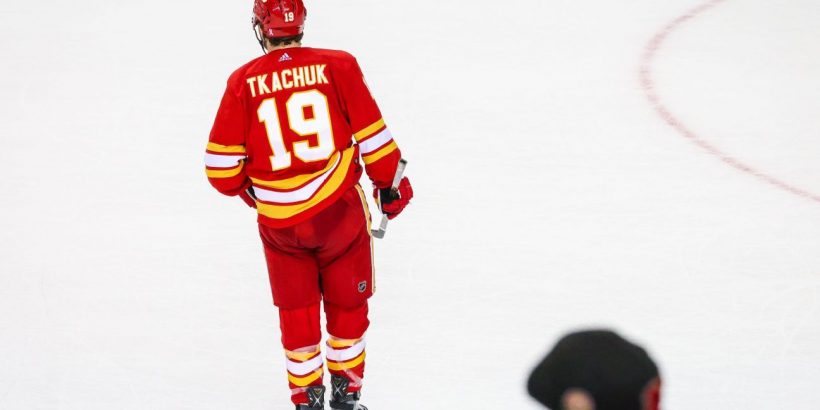 Kristen Shilton is a national NHL reporter for ESPN.

CALGARY, Alberta — Calgary Flames forward Matthew Tkachuk has his tough-guy persona down on the ice.

In real life? Tkachuk’s got a soft side. Even when it comes to the Battle of Alberta.

The Flames and Edmonton Oilers are locked in to a heated second-round Stanley Cup playoff series, and the Oilers have had a special fan along for the ride. Ben Stelter is a 5-year-old bravely undergoing treatment for glioblastoma, a kind of brain cancer. He’s been offering Edmonton support — via Dad Mike’s social media channels — all season, meeting Oilers captain Connor McDavid and other players along the way.

Before a regular-season matchup between the Flames and Oilers, Stelter playfully posted a video in which he shot a photo of Tkachuk with a Nerf gun.

Tkachuk didn’t see the evidence of Stelter’s hostility until after the Flames dismantled Edmonton 9-6 in Game 1 on Wednesday. But it tickled Tkachuk, and he responded with a video message of his own for Ben on Thursday expressing his support for Stelter in his cancer fight:

“Hey Ben, I’m sure you’re not the biggest fan of me,” Tkachuk began, “I could tell by the video of you shooting the Nerf gun at me. But everyone here in Calgary is cheering you on, and we’re all big fans of you.”

Before Game 2 on Friday, Tkachuk detailed why it was important that he go the extra mile and show Ben some love.

“Stuff like that is very close to me, [because of] dealing with kids in Calgary with similar situations,” Tkachuk said. “… So, I just thought it’d be good to make a video back instead of just [posting] a picture there. It’s way bigger than hockey. Doesn’t matter who you’re rooting for. We’re cheering him on. He doesn’t like [the Flames]; that’s just what the game brings. But we’re all obviously thinking about him and his family and he’s a true warrior. We’re following him every step when he’s at the games and everything like that, so we’re definitely cheering him on and hoping for the best for him.”

And of course, Stelter’s family was appreciative of Tkachuk’s message: