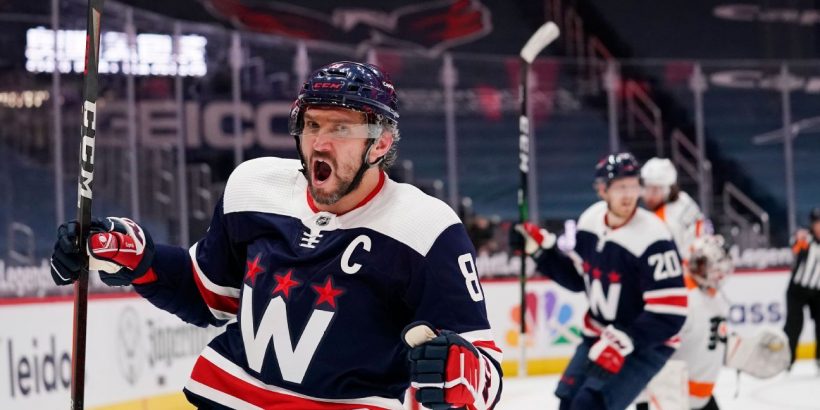 The first time Washington Capitals owner Ted Leonsis spent meaningful time with Alex Ovechkin was after the 2004-05 NHL lockout. Ovechkin, who had been drafted No. 1 overall by the Caps in 2004, arrived at Leonsis’ house to spend a day with the family.

Leonsis’ wife, Lynn, made lunch. Leonsis was impressed that the Russian superstar, then just 20, helped pick up dishes afterward and brought them to the kitchen.

Afterwards, they played basketball with Leonsis’ kids and a few friends. “He was an unbelievable basketball player,” said Leonsis. (Ovechkin’s mom, Tatyana, is a two-time Olympic gold medalist in basketball). They then went swimming. “He was like a torpedo in the pool,” Leonsis recalled. “I’m not kidding, that’s what it felt like.”

Then the two men sat in the pool and talked. “Alex was making eye contact with me, and really listening,” Leonsis said. “I explained how hard this was going to be for him. The reason we were able to draft him No. 1 is that we were a really bad team. It was going to take a really long time to be a good team. Our goal was to win the Stanley Cup, but also for him to live a full self-actualized life and grow up with us.”

Ovechkin remained a captive audience. Leonsis then got philosophical.

“My belief was that communities fall in love with a young player,” Leonsis told Ovechkin. “And then they often get their heart broken when the young players want to leave.”

Leonsis ended his spiel with a pitch: “Alex, trust me. Let us trust you. Let’s do this together.”

Last week, the Capitals announced a new contract for Ovechkin: five years, with an average annual value of $9.5 million. The deal will take Ovechkin through age 40; should he average 33 goals per season, in that time he will also break Wayne Gretzky’s all-time NHL goal-scoring record (894).

Ovechkin negotiated the deal himself, emblematic of the trust he and the organization have forged over nearly two decades together.

“The idea of him playing in Russia, or playing for another organization, just didn’t make sense,” GM Brian MacLellan said. “It was important we brought that tone into the negotiations that we were going to try to make it work. We wanted him to finish his career here, be happy about the contract, be happy about the term, and go out the right way.”

Here is the story of how it all came together.

Ovechkin has been a superstar ever since he stepped on NHL ice. He scored 52 goals as a rookie. Two years later, he was named league MVP. He was MVP the next season, too.

Leonsis was right: it would take a long time to reach their goals. Despite making the playoffs in 10 of his first 13 seasons, it took until 2018 for Ovechkin to help lead the Capitals to the organization’s first Stanley Cup. Ovechkin’s impact off the ice was felt well before that.

“When I bought the team [in] 1999, I paid $85 million, and we struggled to put fans in the stands,” Leonsis said. “We had 2,900 season-ticket holders in a 20,000 arena. The year before I bought the team they had gone to the Finals and couldn’t sell out playoff games. The following year, they didn’t make the playoffs and renewals were terrible.”

After Ovechkin’s first MVP season in 2007-08, the first under coach Bruce Boudreau, the Capitals sold out all their playoff games. “The next season we sold out every game. And we’ve sold out every game since,” Leonsis said. “Now we’re a top-10 revenue team, and a top-six or -eight ticket-selling team. We’ve become a destination. Now I would say the Caps are worth a billion dollars.”

The Caps realized the power of Ovechkin by the time his three-year, entry-level deal was expiring in 2008.

“When it was time for his second deal, there was a standard deal template,” Leonsis said. “[Sidney] Crosby had signed a five-year second deal, and we could have done something like that too.”

Team president Dick Patrick had other ideas. In a meeting with Leonsis, Patrick said: “I’m very conservative, and I’m very skeptical. And when you give players long-term deals for a lot of money, sometimes they change, sometimes their love of the game changes. I think there’s something special here, though. So why don’t we do something radical? Why don’t we tell Alex we want to negotiate your bridge contract, your B contract, and your free-agent deal all at the same time?”

At the time, Tatyana Ovechkin was serving as her son’s agent. Leonsis brought the idea to them of a long-term contract, and explained the Capitals were the ones assuming the risk. If Ovechkin got hurt, he’d still get paid.

The benefit of a long-term deal: If Ovechkin lived up to what the Capitals hoped he would be, it would work out for both sides.

The negative: There could be someone else in the industry who gets paid more in that span, as the salary cap grows.

“What I admired about Alex is, he never once compared himself and his deal to anybody else,” Leonsis said. “He never asked to be traded. He never said fire a coach. It’s just a remarkable personal journey for him.”

Sometime in the middle of Ovechkin’s 13-year contract, Leonsis met Wayne Gretzky at an event. The two men sat down and talked.

“Alex is the only player I’ve ever thought could break my record,” Gretzky told Leonsis. “He loves the game. He has such a great relationship and comfort in D.C.; don’t ever break that.”

Soon after, Leonsis saw the 30-for-30 documentary about Gretzky’s trade from Edmonton to Los Angeles. “And I laugh,” Leonsis said. “Because the Oilers won four Stanley Cups but the only thing the owner is known for is trading Wayne Gretzky.”

As Ovechkin’s 13-year deal was nearing expiration this season, Leonsis often joked during talks with other team officials: “They’re not going to make a 30-for-30 about us.”

During the pandemic, ESPN released “The Last Dance.” Leonsis was riveted.

“It was 10 hours about Michael Jordan’s greatness,” Leonsis said. “But also about how they did not feel loved or connected to the team.”

Leonsis didn’t want to be that guy. He already felt like he was on a good track, though.

Because Ovechkin had signed a long-term deal in 2008, teammate Nicklas Backstrom followed by committing to 10 years in 2010.

“Alex not only made the commitment to us, but made it to Nick, then they embraced John Carlson,” Leonsis explained. “Keeping Alex, keeping Nick, keeping John Carlson, building a 20- to 25-year journey with these guys, with Alex as the bedrock, was the right thing for us to do. It’s a wonderful story.”

Backstrom’s deal expired in 2020. He chose to negotiate his next deal himself.

“He literally went season by season, of what we needed to do and how he’d have to play, with five-on-five goals and power play. He landed on five years [for his contract]. It was remarkable how the two of them — unlike Lennon and McCartney, instead of breaking up, they were totally in sync.”

Contract negotiations for Ovechkin’s new deal began informally. Ovechkin talked to MacLellan throughout the season. The captain and GM met a few times, often at hotels on the road.

“He’d go back and talk to his family, and a few advisers,” MacLellan said. “Then he’d come back to me and we’d talk again. It went on for quite a while.”

The first discussions were philosophical. Ovechkin wanted to hear about the direction of the Capitals. He wanted to know what MacLellan envisioned and what types of moves he planned on making.

“Then term became important,” MacLellan said. “He zeroed in on five years, and that became very important. He liked the term of five years; he has some personal goals in mind.”

Once five years was determined as the term, the two needed to hash out the average annual value.

“His main goal wasn’t to make as much money as possible,” MacLellan said. “He probably would get a shorter term at a higher AAV if he wanted to go outside [of the Capitals]. Probably could have made more money going back home to Russia, I would assume, there are probably some tax advantages there. We had discussions: ‘Here are your career earnings. Is a higher contract going to affect your standard of life going forward, or is it about finishing your career out the right way?'”

At $9.5 million — just a shade lower than the $9.54 million AAV on his last deal — the Caps and Ovechkin felt like they could keep the team competitive. (That Ovechkin’s contract has nearly the same cap hit it had 13 years ago is an interesting indictment of the NHL; Leonsis says it is a direct byproduct of the NHL still being driven more by local revenues than national revenues).

“We had to get a $4 million player out,” MacLellan said. “You go higher than that, we probably have to move another player out. You get thin quick when that cap isn’t going up. So that was an important factor keeping it at $9.5 [million].”

Conversations between the Capitals and Ovechkin continued as the captain returned home to Russia for the summer. They hashed out final details on the phone, and via text, before finally landing on the deal.

“It was a bummer we weren’t able to do it in person,” MacLellan said. “But we all felt really happy about it. He was excited. He’s an emotional person. I think he was excited about knowing what he would be doing for the next five years.”

On Thursday, the Capitals held a news conference announcing the deal. And shortly after that, Leonsis was pulled into talks regarding the NBA’s Washington Wizards, a team that he also owns.