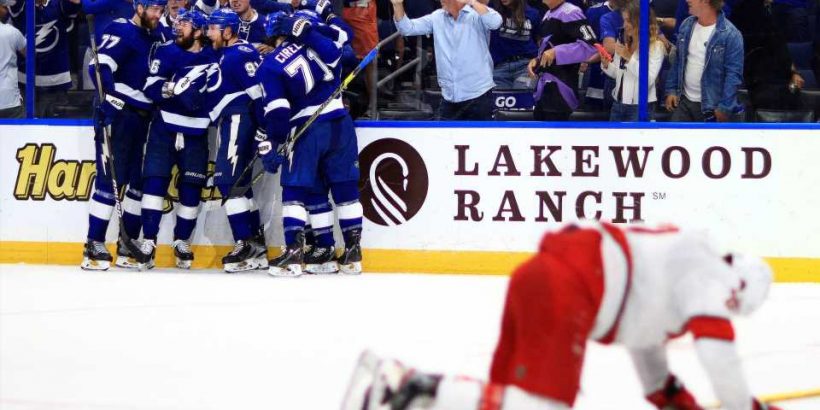 The Lightning now have a 3-1 series lead over the Hurricanes thanks to a chaotic second period in Game 4 that saw eight goals scored between the teams. The Lightning won 6-4.

Tampa Bay entered the period with a 1-0 lead, but in a 39-second span about 4 1/2 minutes in, they trailed 2-1 thanks to goals by Teuvo Teravainen and Jesper Fast. OK, no biggie.

But then the fun truly began midway through.

Steven Stamkos scored a power-play goal at 9:54 to tie the game. Forty-one seconds later, Dougie Hamilton made it a 3-2 Carolina lead. Just over two minutes after that, fellow defenseman — and 2021 Lady Byng finalist — Jaccob Slavin made it 4-2.

“Probably the craziest playoff period you’re going to see the rest of the way,” Stamkos noted. “Certainly exciting for the fans, but you know, I give our guys credit; we go down two goals, a couple unlucky bounces. I didn’t think we were really playing our game and we just kind of talked about staying in the moment. . . . A win’s a win in the playoffs. We’ll certainly take it.”

While Stamkos was his usually calm self regarding the period, which saw the Hurricanes pot four goals themselves, head coach Jon Cooper was more colorful with his description. After the Lightning lost in Game 3 in overtime, Cooper compared the playoffs to a “big damn roller coaster”; in Saturday’s postgame Zoom, the Tampa Bay Times’ Eduardo A. Encina referenced that quote and asked what ride would that second period have been.

“I haven’t been to a theme park in a long time,” Cooper said before asking Gabriel Marte, the Lightning’s digital video manager: “What’s like the badass roller coaster you’ve ever seen?”

After some confirmation from others in the room: “It was the Hulk.”

The “Hulk” is the Incredible Hulk Coaster at Universal Studios and is described on Universal’s website this way: “Before you can blink, you’re catapulted out with the force of a fighter jet. Hulk-like power propels you upside down into a weightless zero-gravity roll, racing faster and faster down the track. Hang on with superhuman strength as this high-speed, red-line rampage smashes its way through the sky.”

Translation: a doozy. Cooper then continued with his answer.

“It’s weird, I think there were 11 goals in the series (entering Saturday) . . . and to see whatever it was, eight going in the second period. That was chaotic. The damn circus out there,” he said. “But definitely no refunds after that one. That was, take your coach’s hat off. It was one hell of an entertaining second period.”

Game 5, when Cooper’s squad will look to close things out and move on to the Stanley Cup semifinals, is Tuesday in Raleigh.