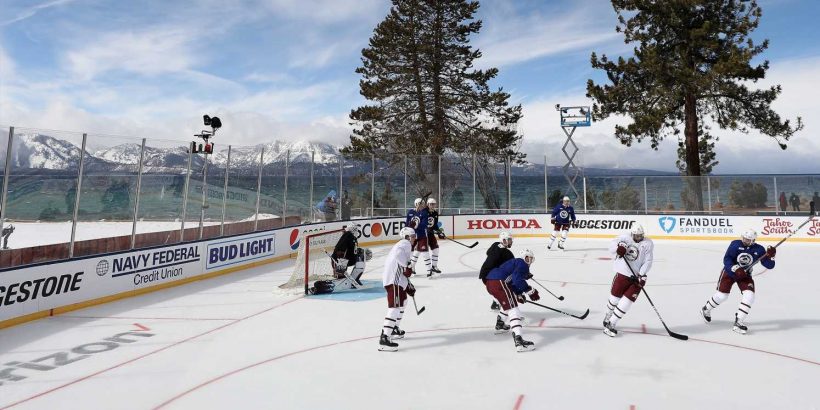 After a whirlwind few months of planning and weeks of construction, gameday for the first of two outdoor NHL contests on the southern shores of Lake Tahoe in Stateline, Nevada, has arrived.

The games will take place on a rink built on the 18th fairway of the golf course at Edgewood Tahoe Resort, which hosts the American Century Championship, a celebrity golf tournament, every summer.

BACKGROUND: How the NHL's Lake Tahoe games came about

TELEVISION: NBC's broadcast will be as 'unique as it gets'

When will the Vegas Golden Knights vs. Colorado Avalanche and Philadelphia Flyers vs. Boston B outdoor games be played?

The Golden Knights-Avalanche game will be shown Saturday at 3 p.m. ET on NBC. The Flyers-Bruins game will shown Sunday at 2 p.m. ET. The second game was moved up an hour because of predictions of bright sunshine during the game.

How can you stream the games?

The two games can be streamed on NBC Sports.

Who will be the NBC announcers?

What is the weather report at game time?

What are the teams' outdoor records?

The Golden Knights are making their outdoor debut. The Avalanche are 0-2, the Bruins are 2-1 and the Flyers have gone 1-2-1. The Bruins beat the Flyers 2-1 in overtime at the 2010 Winter Classic in Boston's Fenway Park.

The Golden Knights and Avalanche have split their season series. … Expected starting goalies Marc-Andre Fleury (Vegas) and Philipp Grubauer (Colorado) are early favorites for the Vezina Trophy. Fleury is 0-2 outdoors and Grubauer left with an injury in his lone outdoor start. … The Golden Knights have 11 players with NHL outdoor experience, plus coach Peter DeBoer. The Avalanche have 18 players, plus coach Jared Bednar. … Vegas' Max Pacioretty (with Montreal) and Colorado's Brandon Saad (with Chicago) are the teams' leading outdoor scorers, each with a goal and assist in three games.

The Bruins are 4-0 against the Flyers this season. … Philadelphia's top outdoor scorers, Claude Giroux and Jakub Voracek, are among six Flyers players not making the game because they're on the COVID-19 protocol list. The Flyers have 12 active players with outdoor experience, plus coach Alain Vigneault. … Philadelphia's James van Riemsdyk will be appearing in his seventh outdoor game. He has two goals and an assist. … The Bruins have 14 players with outdoor experience, plus coach Bruce Cassidy. … Patrice Bergeron is their leading outdoor scorer with three points in three games.