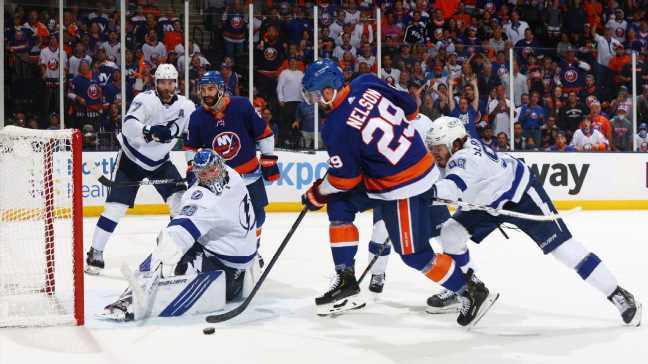 The New York Islanders and Tampa Bay Lightning are deadlocked at 2-2. Who takes control of this series in a pivotal Game 5?

Meanwhile, Vegas Golden Knights coach Peter DeBoer made a gutsy decision switching goalies in Game 4, and it paid off in a big way, as they knotted up their series with the Montreal Canadiens.

Check out the ESPN NHL Playoffs Daily to catch up every day of the postseason until the Stanley Cup is handed out in July.

The Lightning made a push in the third period of Game 4, but it wasn’t enough to overcome the Islanders, who took a 3-0 lead and held on to win, 3-2, thanks to an incredible defensive stop by Ryan Pulock in the final seconds. The good news for Tampa? The Lightning are 11-0 following a loss in the past two postseasons.

We’ll be watching to see if Brayden Point can keep his goal streak alive; he has scored in seven straight games. The record is held by Reggie Leach, who scored goals in 10 consecutive games in 1976.

The Islanders didn’t end up making lineup changes in Game 4 (so Oliver Wahlstrom remains on the bench, for now) but Barry Trotz did shuffle his lines. “It’s something I’ve been contemplating each game,” Trotz said. “They’re going to be low-scoring games. I don’t think we can get into a track meet with this team. The [Lightning] finish so well. I had last change, I felt there was more cadence in this game. I felt that would be an easier switch for me. We’ll see what we do next game.”

The story of this game was Vegas coach Peter DeBoer benching Marc-Andre Fleury (who had started 15 of 16 postseason games) for Robin Lehner (who had one disastrous start this postseason). The decision came after Fleury misplayed a puck at the end of Game 3, which directly led to the late game-tying goal. However, DeBoer insisted that mistake had “zero” to do with his choice. Instead, the coach was concerned about Fleury’s fatigue level, noting he’s 36 and is tied with Andrei Vasilevskiy — 10 years his junior — in playoff starts this season.

Lehner was fantastic (saving 27 of 28 shots), but goaltending hasn’t been the Golden Knights’ issue in this series. It’s been their offense, which has dried up at inopportune times. The high-danger scoring chances were 17-0 for Montreal in this game going into overtime. A late goal by Brayden McNabb kept Vegas alive, then Nicolas Roy scored in overtime to win it. A stunning stat that tells the story of the Golden Knights this series: Roy is only the second Vegas forward to score against Montreal (Mattias Janmark is the other). Full recap

Three stars of the night

Lehner stopped 27 of 28 shots to earn the win. His best save came in the third period, as the Canadiens — already holding a 1-0 lead — nearly doubled it with Cole Caufield coming in on a breakaway.

“In the pre-scout we thought he likes to go high or he goes five hole,” Lehner said. “Looked like he was going five hole, so I closed my legs.”

What an incredible moment, scoring the overtime winner against the team for which you grew up cheering. It does sting for current Habs fans that his last name happens to be Roy.

The 24-year-old, whose first language was French, joins the Buffalo Sabres’ Rene Robert (1973) and the New York Rangers’ Ron Harris (1974) as the only Quebec-born players to score a playoff OT goal against the Habs in Montreal.

At this point you may be wondering, how did Paul Byron pass through waivers on three separate occasions this season? He’s come up clutch again and again for Montreal in these playoffs, including another big goal on Sunday:

News of the day

Suddenly, the NHL is running into some COVID issues.

Canadiens coach Dominique Ducharme remains away from the team after testing positive. Ducharme says he has no symptoms, and none of his close contacts have tested positive, either. The coach had received his second vaccination shot less than two weeks ago, and insisted he and the team followed all protocols while on their trip to Vegas.

Ducharme spoke to the media for the first time on Sunday, and said he was “confident” he’d be able to return at some point in the series, but the NHL and health authorities are still determining when it will be possible.

Meanwhile, the Golden Knights announced their general manager, Kelly McCrimmon, had also tested positive while in Montreal. McCrimmon watched Game 3 from the Bell Centre with Vegas president of hockey operations George McPhee. Both McCrimmon and McPhee were captured on television not wearing masks, which is against NHL protocol.

According to sources, the NHL called McCrimmon and McPhee after the game as a warning, and reminded them of the protocols.

It’s all noteworthy as this series represents the first cross-border travel for the NHL since the bubble in 2020. The NHL received exemptions from the Canadian government to skirt the 14-day quarantine as long as teams followed strict protocols. It’s a positive sign that no players in this series have been affected, and hopefully it stays that way.

“Not many people know, I come to the game four hours early, I get my own bus. I sat for two hours and watched you guys talk s— on Twitter on me, to get me motivated.”

— Vegas goalie Robin Lehner, who is never afraid to speak his mind.