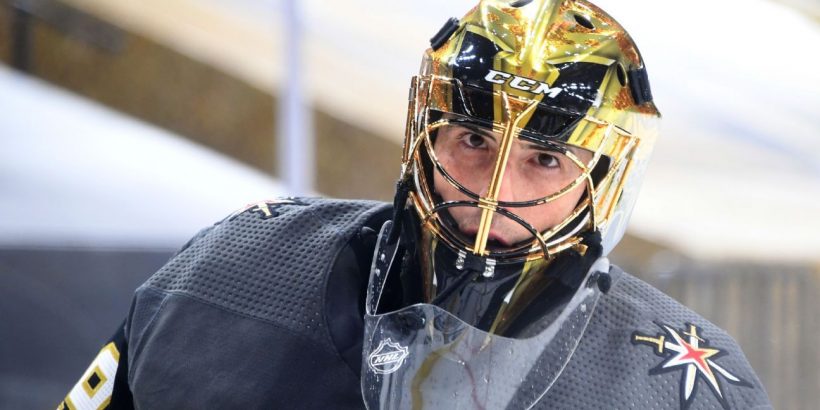 The Vegas Golden Knights and Chicago Blackhawks have agreed to a deal that would send three-time Stanley Cup-winning goaltender Marc-Andre Fleury to Chicago, sources told ESPN on Tuesday.

Fleury’s agent, Allan Walsh, said his client hadn’t been informed of any potential deal by Vegas.

“While Marc-Andre Fleury still hasn’t heard from anybody with the Vegas Golden Knights, he has apparently been traded to Chicago,” Allan said on Twitter. “Marc-Andre will be taking time to discuss his situation with his family and seriously evaluate his hockey future at this time.”

Sources had said there was chatter that Fleury might retire if he was traded from Vegas.

Fleury, a 17-year NHL veteran, won his first Vezina Trophy in 2021 with Vegas. The 36-year-old went 26-10-0 with a career-best .928 save percentage and 1.98 GAA as the Golden Knights had the league’s second-best record in the regular season, trailing only the Colorado Avalanche.

Fleury and Robin Lehner won the William Jennings Trophy as the goalie tandem with the best save percentage this past season. In the playoffs, Fleury led the Golden Knights to series wins against the Minnesota Wild and the Avalanche before falling to the Montreal Canadiens in the semifinals.

Fleury, who won all three of his Cup titles with the Pittsburgh Penguins, had been the Golden Knights’ starting goaltender from the team’s inception and led Vegas to the Stanley Cup Final in its first season.

It had been an awkward time-share after the Golden Knights brought in Lehner at the 2020 trade deadline — in a deal, ironically, with Chicago. Fleury and Lehner got along well off the ice, even as coach Peter DeBoer switched between the goalies over the past season and a half.

During the 2020 playoffs, in which Lehner became the primary starter, Fleury’s agent tweeted a photoshopped picture of Fleury being stabbed by a sword that had DeBoer’s name in it.

Fleury, who is in the final year of a contract that pays him $7 million annually, immediately would become the No. 1 goalie for the Blackhawks. Chicago parted ways with longtime netminder Corey Crawford ahead of last season and instead turned to a trio of youngsters: Collin Delia, Kevin Lankinen and Malcolm Subban.

The Blackhawks are in the middle of a rebuild but are accelerating their timeline. On Friday, the team traded for defenseman Seth Jones and agreed on an eight-year contract with an average annual value of $9.5 million.

Chicago has missed the playoffs in three of the past four seasons, finishing sixth last season in the Central Division. The Blackhawks were without captain Jonathan Toews all of last season as he took a personal leave to deal with medical issues. Toews, however, plans to be back for the 2021-22 season.