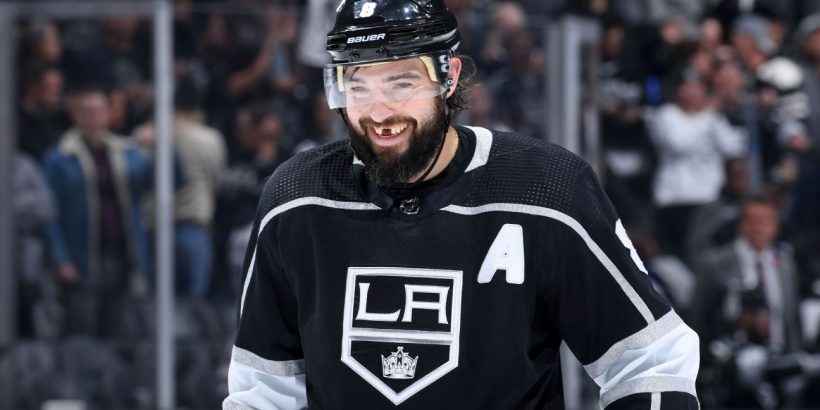 Ryan S. Clark is an NHL reporter for ESPN.

To look forward, Drew Doughty and Anze Kopitar have to look back. That’s when they start rattling off the names of the people who guided them when they first broke into the NHL.

Rob Blake is one of them. So is Dustin Brown. Matt Greene is another, as are Dean Lombardi, Mattias Norström and Jarret Stoll. The guidance they all provided helped take Doughty and Kopitar from promising teenagers – Doughty was the No. 2 overall pick in the 2008 NHL draft and Kopitar was the No. 11 pick in 2005 – to franchise-changing stars who spearheaded the Los Angeles Kings’ run of two Stanley Cup championships in three seasons from 2011-12 to 2013-14..

Winning is still the priority for Doughty, who turns 33 next month, and the 35-year-old Kopitar. Not just now, but even well after their playing days are done and their numbers are hanging from the rafters of the Kings’ arena. That is why the two veterans are taking what they have learned and passing it down to the newest generation of Kings with the hopes they can leave the organization in a better place than it was in when they broke in.

“What you are trying to do is pass down knowledge,” Kopitar said. “Then what you need to realize is not every player is the same. Not every leader leads the same way too. You try to stay in the moment as much as you can and you do it within yourself. … For example, I’m usually, or most of the time, not the loudest person in the locker room. But there are times when stuff needs to be said.”

Those teaching moments can come at any time. They can come on the bench during a game when Doughty offers words of encouragement to place a young player at ease. Or in the dressing room after practice. They can come when grabbing a meal at a restaurant with teammates or those evenings when Kopitar hosts a group meal at his home.

This is what coaches, executives and veteran players mean when they talk about culture. But building that culture takes time.

When Kopitar and Doughty joined the Kings, Kopitar in the 2006-07 season and Doughty in 2008-09, the organization was in the midst of a six-year playoff drought. Doughty said his education started with Lombardi, the Kings’ general manager who was the architect of those two Cup title teams.

Lombardi worked with Doughty to teach him what it meant to be a leader, and help him realize how his actions impacted those around him. Doughty said he was a team captain in youth hockey and in major juniors. But his approach shifted more toward having fun while playing hockey.

Three games into his NHL career, Doughty was already leading the Kings in ice time, an accomplishment Lombardi helped put into perspective.

“When I got to this level, I did not realize the overall effect I have and [Lombardi] helped me grow into the player I am now,” Doughty said. “I just did not really think about being a leader. I did not look up to people for leadership. … The one thing I never realized until I got older is people would say, ‘Guys on the team are watching you.’ I was like, ‘Why the hell are they watching me?'”

The impact Greene made on Doughty was so crucial that Doughty said he still goes to him for advice. Doughty lived with Greene during his rookie season, and said Greene was like a brother or a dad to him, and he still is to this day.

Doughty admits he did not always listen. For example, Greene told Doughty to consistently work out. Doughty balked at the idea. At least he did until he got older and began realizing he needed to do the work in order to perform at a high level.

Perhaps the biggest lesson Doughty learned from Greene was understanding what it meant to take ownership of the team.

“That was the one thing he always taught me: This is your team, but if you don’t push the load, who else is going to push it?” Doughty said. “He said, ‘You have to do this’ and I would ask, ‘Why not ask someone else? Why does it have to be me?’ He said, ‘Because this is your job and responsibility.’ That was only three or four years ago when I had that discussion. Now I realize it is part of growing up.”

It’s one thing to hear that. It is another to act upon it. So how did Doughty and Kopitar impact their younger teammates?

For one, they worked to make sure everyone felt welcomed. Kopitar remembered what it was like to be a 19-year-old and be around a future Hall-of-Famer such as Blake. He knows about the nerves in trying to make a good impression and the importance of keeping them in check at the same time.

“I’m sure it’s the same thing with these guys now,” Kopitar said. “Some of these guys watched us growing up 10 years ago winning the first Stanley Cup. It’s got to be sometimes a little uncomfortable. But between me and Drew, I feel like we’re fairly open people and very approachable. We try to make it as comfortable as we possibly can.”

On the day Doughty spoke with ESPN, he was on his way to have lunch with a few of his younger teammates, including rookie defenseman Brandt Clarke, who is 19. Doughty spoke with excitement about Clarke and how they have been working together. He had the same level of enthusiasm when talking about center Quinton Byfield, who turned 20 in August.

Byfield and Doughty became close last season when both were injured. Doughty said he and Byfield skated together, worked out together and that he drove Byfield to games last season. They even play video games together.

Kings defenseman Mikey Anderson, who is in his third full season, is one of eight homegrown players younger than 24 on the Kings’ active roster. They are part of a core, which also features Byfield and Alex Turcotte among others, that seems to have the Kings moving on from their rebuild and beginning down the path of potentially being a perennial playoff team.

The 23-year-old Anderson offered insight into what it has been like to learn from Doughty and Kopitar. He said Doughty, who is his defensive partner, will make a subtle joke or say something that will make a teammate smile in the hopes of relaxing him.

“He’s hard on guys, but he is also patient,” Anderson said. “If something doesn’t go right, he’ll let you know what we need to do to fix it. But when things go right, he’s the first guy to tell you, ‘Hey man, great work. Keep doing this. Keep doing that.'”

When asked about Kopitar, Anderson said the Kings’ captain will have the younger players over to his house so they can hang out with his children and have dinner with his family. The first couple of times Anderson had dinner at the Kopitar house, he said he felt starstruck because he was not sure what to expect.

But Anderson eventually realized something that helped him overcome being nervous about going to those family dinners. The more often he was invited, the more Kopitar wanted him to be himself.

Anderson said Doughty and Kopitar are so welcoming that they go as far as making sure their younger teammates feel comfortable with their living situations. That can include anything from making furniture recommendations to connecting them with a real estate agent if needed.

“They make you feel like you belong and you’re part of the team,” Anderson said. “I don’t know if that always happens. But we have been so lucky to have those two, [Jonathan Quick] and I’ll even throw Brownie [Dustin Brown] in there too. For my first couple years, those guys all welcomed the young guys with open arms to be part of their own family.”

After this season, Kopitar has one year left on his contract while Doughty has four. Both have built the sort of resumes that will see them retire as two of the greatest Kings of all time while also making strong cases for being inducted into the Hall of Fame.

But for Doughty and Kopitar, their careers are about more than that.

Maybe there will come a day when players such as Anderson, Byfield or Clarke are in their 30s and look back on what life was like earlier in their careers. They will share stories of what it was like to learn from an older group of guys who cared about them with the hope those lessons can continue to be taught to the next generation.

That is the legacy Doughty and Kopitar want to leave.

“We’ve had some not so good teams at the start and then we had some really good teams,” Kopitar said. “I think our upside now can be very high. I see the potential here with this team and I wouldn’t want to play anywhere else.”