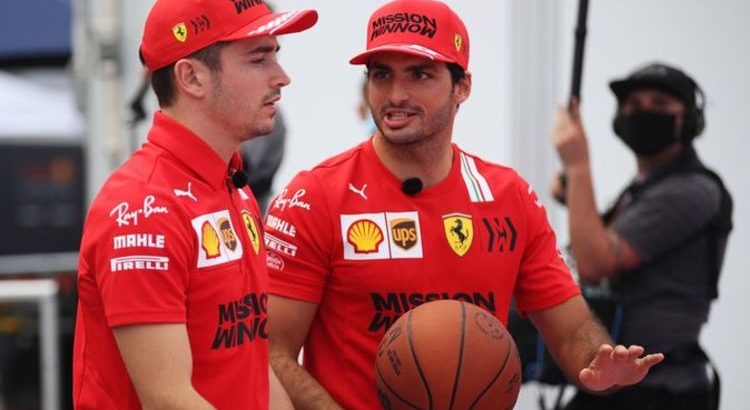 Nico Rosberg tells of his willingness to befriend Lewis Hamilton

Carlos Sainz says he struggled to believe the pace of Ferrari team-mate Charles Leclerc during the 2021 F1 season. It was Sainz who edged the Monaco man in the drivers’ standings, finishing fifth to lay claim to being the top driver outside of Red Bull and Mercedes.

Leclerc was seventh, just 5.5 points behind his partner and one off McLaren driver Lando Norris in front of him.

This was despite him regularly out qualifying Sainz, but it was the Spaniard who proved more consistent, scoring points in 14 consecutive races and notching four podium finishes.

Together however, the pairing enjoyed a successful first season together with the Scuderia, taking their team into the top three of the Constructors’ standings and back in front of English rivals McLaren.

And now Sainz, 27, has conceded he benefited from the “crazy quick” displays of Leclerc in testing, saying he was able to learn plenty as the season went on.

“I would have to pinpoint a lot of them because this year to be honest since the moment I arrived to winter testing in Bahrain I had a lot of things to learn from Charles,” Sainz was quoted as saying by crash.net.

“The way that he was driving the Ferrari in a particular way to be as quick and as fast as he’s being all year long and I’ve had to adapt myself, I had to copy a lot of the stuff that I was seeing on the data.

“Sometimes it was difficult to believe that it was possible to do that and it was so crazy quick that it was actually a bit shocking but little by little adapting and trying to learn from him I managed to get to a good level – and there are still things that when we will go into the winter break he’s much stronger than me in certain areas.”

The regulations are expected to ensure there is no repeat of the dominance enjoyed by Lewis Hamilton and Max Verstappen last season, with the pair notching 18 of the 22 Grand Prix wins between them.

As a result, Sainz, who joined Ferrari after two years at McLaren, has talked up his title chances with the likes of Ferrari now expected to be in the mix.

Add he believes that the tight battles between him and Leclerc, 24, will only serve to help both drivers improve and push the team to new levels.

“We will exchange some information and we will try and both become better drivers learning from each other,” he continued.

“And I think that this tight battle and this tight competition is what is going to bring Charles and me again to a better level next season, and it’s also going to benefit Ferrari and ourselves.

“So it’s a great competition to have and a great team-mate to have, apart from a great guy and a super cool guy to have as a team-mate.”