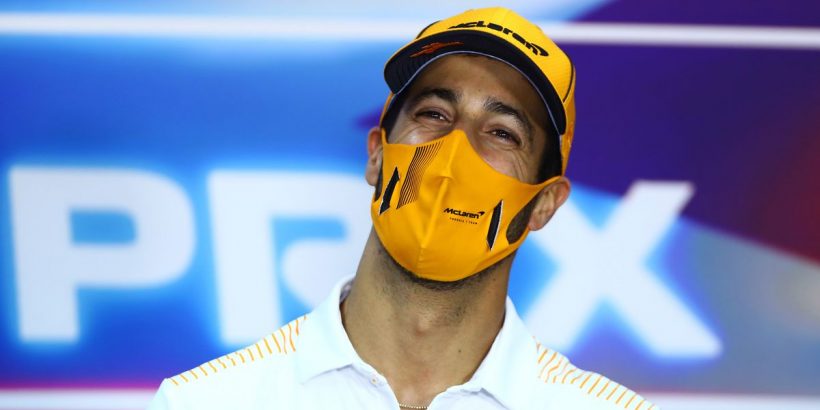 McLaren driver Daniel Ricciardo admitted he still gets goosebumps when talking about the fact that he raced against his idol Michael Schumacher.

Many of the drivers on the grid aspired to imitate Schumacher’s success as well as race against the German, so it is no surprise to learn Ricciardo’s emotions were high when the opportunity came.

The Australian driver made his Formula 1 debut in 2011 with HRT, but he impressed during his first season with Toro Rosso the following year.

When racing at the Suzuka Circuit in the Japanese Grand Prix, Ricciardo was locked in a duel with the seven-time world champion, who was driving for Mercedes at the time – and the German manufacturer were certainly not the force they are today.

Ricciardo finished ahead of Schumacher, pipping the German to the line to take home the last available point.

“I remember one of my first races at Suzuka, and there I had a short duel with him,” Ricciardo recalls to German publication Sport Bild. “It was like a game of cat and mouse on the track.

“That was really unreal. I enjoyed every second.”

The 32-year-old – who sits in ninth in the 2021 Drivers’ Championship with 50 points – continued to heap praise on Schumacher and remembers how even his father, Joe, was in awe of the clash.

“Michael had already won seven world titles,” Ricciardo added. “He is the god of this sport.

“After the race, my father took me aside for a moment, talking about the duel. He said, ‘Do you have any idea what just happened?’ I had to let that sink in first.

“When I’m older, I’ll think back to moments like that. My god, now that I tell it I just get goosebumps again.”

Ricciardo is now racing against Michael’s son, Mick Schumacher, after the 22-year-old signed with Haas.

Despite critics claiming Schumacher was only handed the opportunity because of his iconic surname, Ricciardo moved to dispel such suggestions.

“I don’t want anyone to think Mick Schumacher is in F1 just because of his name,” the Australian insisted. “Everything I see from him shows me that he has earned his place here with us.

“He works so hard and I’m impressed with his journey.”

Both drivers will be in action soon as Formula 1 returns with the Belgian Grand Prix at Spa-Francorchamps on August 29th.