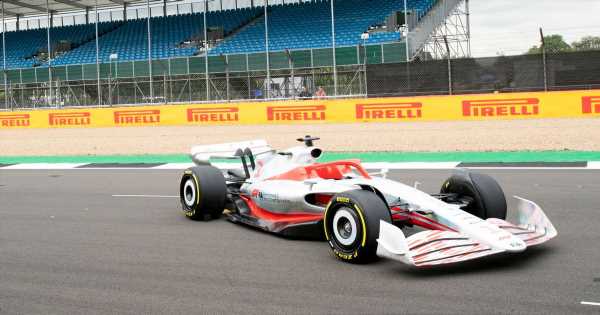 Formula One have given a huge glimpse into the future by unveiling what next season's car will look like.

The new wheels appear to be radically different from those we've seen in recent years from F1, with a host of new regulations to be put in place.

In an attempt to level the playing field, F1 chiefs have put in place a host of changes which are set to deliver more exciting battles on the track and shake up the predictable podiums fans have come to expect.

A full-sized model of the new car was unveiled ahead of this weekend's British Grand Prix at Silverstone as the drivers checked out what they would be racing next season.

The new set of wheels features all-new aerodynamics and the phenomenon called ground effect, a twist on that seen in the 1970s and 80s.

Fully shaped underfloor tunnels instead of the stepped floor currently being used will help to produce more efficient downforce, which should add more excitement to overtaking.

One of the biggest changes you can see straight away is that the front wing and nose have been completely redesigned.

The thinking behind that is also to generate consistent downforce, especially in overtaking positions, while also keeping the front wheel wake as stable as possible.

During the testing, F1’s Motorsports team who developed the new car actually tested the car without a front wing at all, but ultimately decided against it.

Another exciting change, which cannot seen on the car, is the introduction of a more sustainable fuel which will take F1 another step closer to creating a fully sustainable fuel.

The E10 fuel uses 10 per cent of ethanol, as the name suggests, made from a sustainably sourced second generation biofuel, almost eradicating the carbon footprint completely.

The power unit on the 2022 car is not changing though, with the 1.6-litre turbo-hybrid units set to be carried over from this season.

The new car has a longer nose section to help dissipate energy in the event of a crash, an addition that has been included from the investigation into the fatal accident involving Formula 2 racer Anthoine Hubert at Spa in 2019.

The brand new car has been put through over 7,500 simulations to ensure the best product possible has been created, creating around half a petabyte of data, which is the equivalent of a third of the 10 billion photos on Facebook.