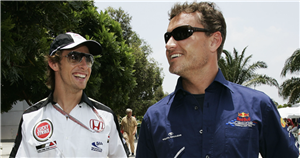 Jenson Button began his Formula One career in an era that featured some of the sport’s greats.

At the tender age of 20, Button, then Britain’s youngest ever F1 driver, was going wheel-to-wheel with the likes of Michael Schumacher, Mika Hakkinen, David Coulthard and Jacques Villeneuve.

That’s some collection of names, but Button held his own in his first season on the grid, finishing fourth at the German Grand Prix and collecting a total of 12 points to finish 8th in the world championship.

Speaking to Daily Star Sport at the launch of his exclusive Readly magazine collection, the 2009 F1 world champion reveals what it was like during that first season 21 years ago and who he looked up to on the grid.

“Yeah, I did”, Button replies when questioned on whether he had any role models on the grid.

“My first year in F1 it was Mika Hakkinen and Michael Schumacher. Racing against those two guys that I’d watched for years was insane.

“They were heroes of mine if you like. Michael had won with Benetton in the past and Mika had won in the previous two years with McLaren.

“You’ve got two multiple world champions on the grid and a 20-year-old boy from Froome in Somerset.

Who do you think will win the Styrian Grand Prix on Sunday? Let us know in the comments section.

“Going wheel-to-wheel with them – which I did at times in that first season – was a pretty special feeling and put a big smile on my face.”

Going up against such established names can be a daunting prospect, but it also offered Button an opportunity to learn and grow as a driver, although the 41-year-old believes today’s racers probably help each other out more.

“I think drivers are a lot more open now than they are back then,” Button continues.

“I think when drivers come into F1 now they probably don’t look up to the other drivers as much as we did back then.

“I used to see them on TV and it was like, ‘whoa!’ I was told that I was racing against them and it was a big shock to the system. I still didn’t feel like I deserved to be there.

“I didn’t really talk to them but my team-mate was pretty experienced – Michael Schumacher’s brother, Ralf, so I learnt a lot from him, both positives and negatives.”

“There were certain drivers that were very helpful, in particular, Jonny Herbert. It was more a case of you’d hang out with people from the same country, so the Brits.

“David Coulthard, DC showed me how to party.”

Button’s life has always revolved around motorsport. Even growing up, the former Brawn, Honda and McLaren driver was consumed by the racetrack – not what his friends were into.

“It was all motorsport for me back then”, Button confirms.

“I did get into cycling and the Tour de France, but went through a bit of s*** storm with Lance Armstrong and what have you. I loved that sport.”

“In terms of other sports when I got into F1 – not really. All my mates were into football.

“We’d go down the pub and watch football but I wasn’t really paying attention; I was just drinking my beer.

“And funnily enough that was the same pub that Frank Williams called me in and asked me whether I wanted to drive his car – The Vinetree in Froome.”

Button said yes, and the rest, as they say, is history.

Jenson Button is fronting Readly’s ‘Step back in time’ retro campaign. Readly is offering two months free unlimited reading to over 5000 magazines and republished retro issues from 22nd June until 30th of September 2021, then £7.99 a month thereafter. Visit www.readly.com/motorsport21 for more information.