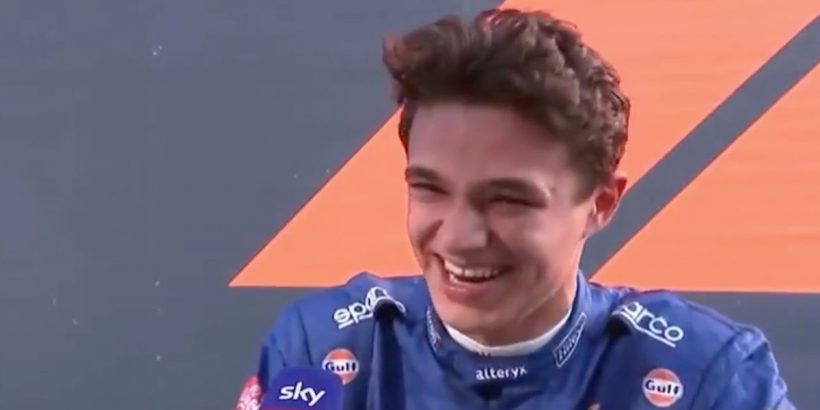 Lando Norris was left in hysterics following a gaffe during an interview at the Dutch Grand Prix.

The F1 star was speaking with Sky Sports about the conditions at the Zandvoort circuit, in which he finished 10th during the Dutch GP.

The 21-year-old, who is currently fourth in the Drivers Championship, made an innocent comment about how “blowy” the wind was and he couldn't stop laughing.

The McLaren driver was the last to change his tyres during the first race at the Zandvoort circuit since 1985.

“It was really tricky, especially the last five laps of the stint,” Norris said after being asked how tricky it was to handle his McLaren. “The first 20 are quite straightforward because you’re just in the queue waiting for them to box and get out of the way.

“So you’re looking after the tyres, doing what you can with the fuel and things like that because you know that time is going to come at some point.

“As soon as we got clear and had some clean air then the pace was very strong. And we tried going as long as we could to cover them off.”

The Brit added: “But it got to the point, especially as the wind was as gusty and as blowy as it was today … Blowy, that was a word. As strong as it was today. Oh no.”

He kept laughing as tried to continue answering the question, as Sky Sports’ Natalie Pinkham added: “It is a word.”

What did you make of the returning Dutch Grand Prix last weekend? Let us know in the comments section.

Norris replied: “That’s just going to get clipped or something.”

“When the tyres are that old as that one, then it becomes just such a knife edge to perform,” he went on, before he began to chuckle again.

Pinkham was also in stitches, as Norris said “I can’t stop” and wiped away a tear.

“It was tough but it all paid off and as much as I would have liked to stay ahead of the Red Bull as well at the end or try and fight the Alpine’s, we didn’t have the pace advantage. I’m happy enough with one point.”

Norris will have the chance to improve his race finish at the Italian Grand Prix on the weekend.