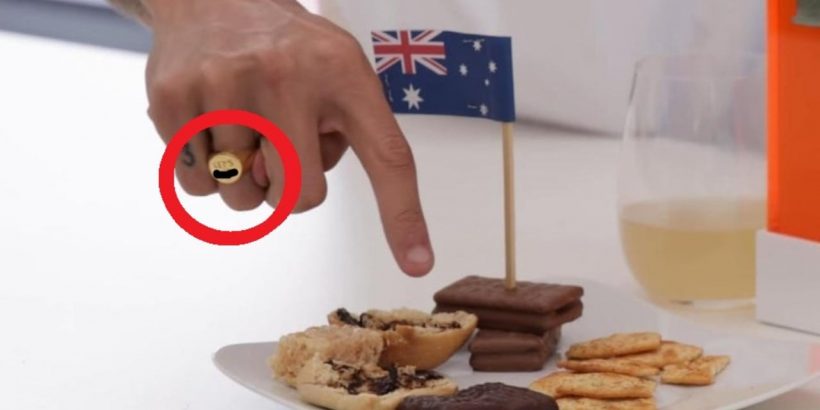 Daniel Ricciardo is anything but subtle.

Fans of the Aussie F1 star lost it when they noticed a not-safe-for-work detail hidden among his ensemble as he appeared in a fun social media video for McLaren.

Ricciardo explains Vegemite to Norris, who clearly doesn’t appreciate the salty spread. Rice krispie squares come next and of course Tim Tams were on the menu — even though they’re not the West Australian’s favourite biscuit going around.

But while the drivers’ attention was on the snacks, eagle-eyed viewers were fixated on something a bit racier.

With Ricciardo’s hand constantly dipping towards plates full of food, a ring he was wearing on one of his fingers attracted plenty of airtime. A close-up revealed it carried a very rude two-word message as fans on Twitter gave it the tick of approval.

The first word was “Let’s” and the second word started with “F”, which we’re sure you can probably guess.

Daniel Ricciardo plays by his own rules.Source:Reddit

There was plenty of reaction online to the hidden message but it’s all business for Ricciardo this weekend as he prepares for the Styrian Grand Prix.

The 31-year-old finished P12 in Free Practice 1 in Austria but ramped things up considerably in the second practice session, where he finished second fastest behind former Red Bull teammate Max Verstappen.

“It feels alright … I know it’s only Friday but for sure, I’d rather be in the top three than 10th saying we’ve got a lot of work to do tonight,” Ricciardo said.

“I think we do a bit of fine-tuning, but we’re certainly not lost. Far from lost actually, so I think we’re in a good place.

“Obviously low fuel pace was good this afternoon. I think we definitely picked something up from the morning. The high fuel, probably a little more to find relative to low fuel but definitely a productive afternoon.”

Whether Ricciardo can maintain that pace for qualifying remains to be seen, but seven-time world champion Lewis Hamilton is tipping Verstappen and Red Bull to be the ones to beat when the main event rolls around on Sunday.

“It’s very close I think with the whole pack. I think the Red Bulls, definitely, will be really hard to beat,” said Hamilton. “I think they’ve just got the edge, maybe more. We don’t know what they’re going to do when they turn that engine up.”

Daniel Ricciardo is searching for his first podium in a McLaren.Source:Getty Images