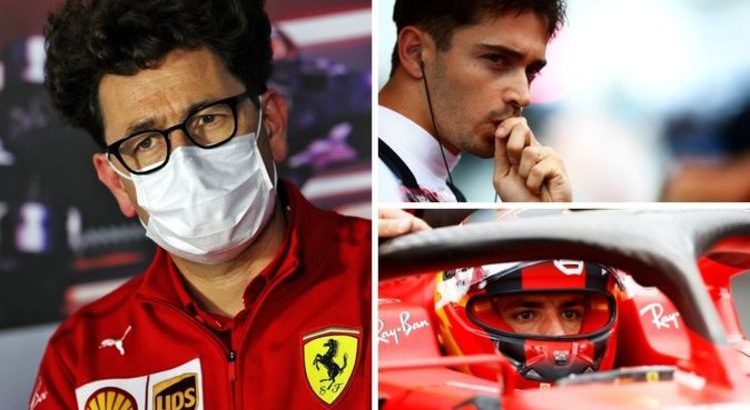 Mattia Binotto admitted Ferrari must continue to improve and fight for the world championship in 2022 after a disappointing time of late. The famous Italian outfit spectacularly failed in 2020, dropping from second-place in 2019 to sixth.

However, the Prancing Horses are currently tied with McLaren for third in the constructors’ championship this season, and things are starting to look up again.

After impressively turning things around following that catastrophic season, team principal Binotto has firmly set his sights on competing for the title when the new regulations come into play next season.

“It is no secret: fighting for the title next year is a must,” Binotto told RTL.

“Failing to do that would mean that we did everything wrong.”

JUST IN: Lewis Hamilton told Valtteri Bottas ‘directly’ what Mercedes should do

The Italian’s comments certainly raised the stakes for a team with such high expectations, but the 51-year-old is confident the team can continue to progress.

“We are the team that has won the most points in comparison with last year and has improved the most overall,” Binotto added.

“That shows that we are going in the right direction and are working well together.”

There have been encouraging signs that Ferrari can make the leap and catch up to Mercedes and Red Bull in 2022.

DON’T MISS
Michael Schumacher health update: Where is Michael Schumacher now?
Ferrari’s Sainz admits why he no longer gets ‘goosebumps’ from F1
Andretti eyeing up Formula One team takeover amid talks with Haas

The Maranello-based team have excelled on street circuits this season, as Charles Leclerc took pole position in Monaco and Baku.

The 23-year-old also led for the majority of the British Grand Prix at Silverstone.

This shows that Ferrari have made a significant step forward from their worst season in four decades, but they are still some way off challenging at the top.

The Scuderia have experienced a turbulent campaign filled with notable ups and downs, with a particular low coming at the French Grand Prix as both Leclerc and partner Carlos Sainz finished outside the points.

After impressing since his move from McLaren, Sainz believes the team have several issues to work on before they can mount a genuine challenge for silverware.

“The tyre [is more linked to] our performance in the race. Our car is good in slow corners.

“The slower, the better. That’s why we were strong in Monaco and Baku.

“On the other hand, we are still lagging behind in all areas where engine performance is crucial.