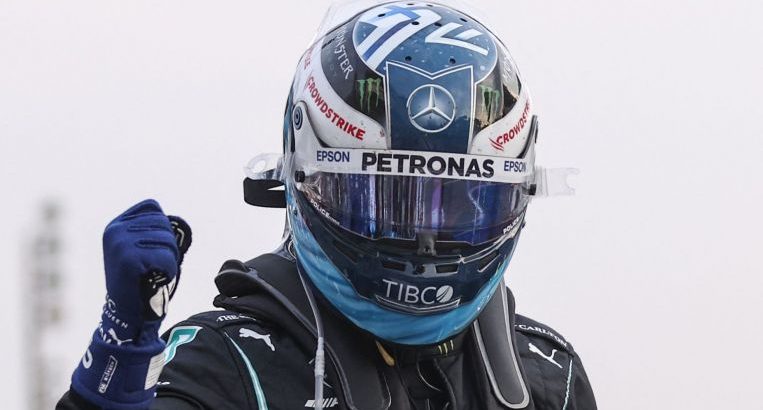 The Finn, whose departure from the team at the end of the season was announced this week, did a one minute 19.555 second lap with seven times Formula One world champion Hamilton 0.096 slower.

Bottas will start from the back of the grid on Sunday after a strategic power unit change triggered a penalty for exceeding the allocation of three for the season, but he will still be able to score on Saturday.

Three points go to the sprint winner, who is also officially credited with pole position. Two go to the second-place driver and one for the third with any grid penalties not applied until after that event.

“That qualifying lap was nice,” said Bottas, who will be moving to Alfa Romeo to replace retiring fellow Finn Kimi Raikkonen.

“It feels so good when you get a nice lap. I managed to save it to the end and had a bit of a tow as well so it was good fun. I enjoyed it.

“I feel good, I feel relaxed and everything is sorted for the future. Really pleased with the team today, the car has been so good,” he added.

Hamilton is three points behind Red Bull’s championship leader Max Verstappen, who qualified third, and is set to cut the gap to the Dutchman on Saturday.

“Congratulations to Valtteri, he did a mega lap,” said Hamilton. “It was looking good for us until the end but then he went quicker, and I just couldn’t match it.”