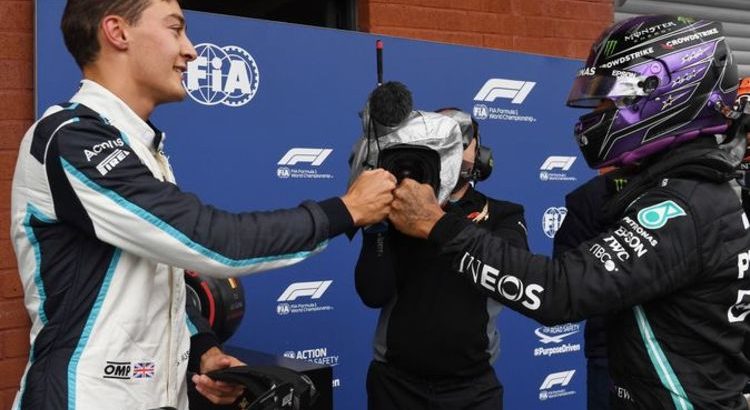 George Russell has been compared to Lewis Hamilton as he prepares for his debut F1 season with Mercedes. Russell, 23, spent three seasons driving at Williams but has been chosen by Toto Wolff to replace Valtteri Bottas, duly forming a mouth-watering partnership with the seven-time world champion Hamilton.

Russell was only able to score 16 points in the 2021 season, but in what was deemed an uncompetitive Williams car, frequently impressed in qualifying which led to him being dubbed ‘Mr Saturday’ by fans.

In Belgium, he was just seconds away from a remarkable pole position, only to be denied at the death by eventual world champion Max Verstappen.

However, his starting position of second became cemented as his finishing one the following day when adverse weather meant only two safety car led laps were possible, meaning a first ever career podium – albeit with only half points awarded.

Following that race Wolff ended weeks of speculation by announcing him for the following season, where he and Hamilton will be charged to trying to land a ninth consecutive Constructors’ crown for the Silver Arrows.

Whether Russell can mount a title challenge of his own however, remains to be seen, but Williams Head of Vehicle Performance Dave Robson has backed him to shine under pressure.

Robson knows all about a British driver being paired with Hamilton as well, having joined McLaren in 2010 as a race engineer for his then partner Jenson Button.

“There is no doubt that he still has more to learn, because working at Mercedes is a different story than working for us. But when it comes to his style and attitude, he is absolutely no less than these two [Hamilton and Button],” Robson told motorsport.com.

“His work ethic and the way he brings the team together, along with his skills and his confidence in making decisions, are the real key factors.

“He has the talent to drive the car. There are plenty of people who also have that talent, but he also has everything to get the best out of the team and to make the right decisions at crucial moments under pressure.”

Robson also argued that Russell would be able to alter his style in a more formidable car.

“Most importantly, George is able to adapt. He drives quite instinctively and I think he will keep improving. He has the talent,” he added.

However, question marks remain over whether Hamilton will be joining Russell on the grid at the season-opener in Bahrain on March 20.

The 37-year-old is said to be contemplating retirement following the controversial events of December’s Abu Dhabi Grand Prix, which saw him lose out on the title to Verstappen.

Hamilton is now waiting the outcome of an FIA enquiry into the controversial safety car procedure which has led to calls for FIA race director Michael Masi to resign.

Reportedly, he will only pledge to drive this season if he thinks the findings are satisfactory.