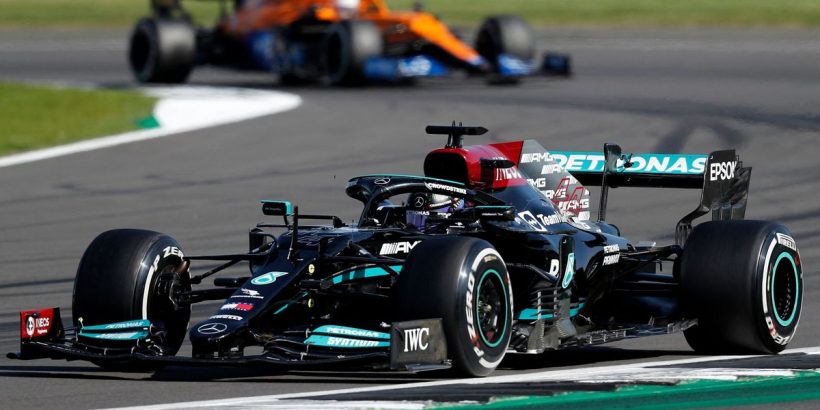 Lewis Hamilton has won the British Grand Prix after pipping Charles Leclerc in a dramatic finish, which came after an earlier crash with Max Verstappen.

Home favourite Hamilton beat Leclerc to the chequered flag after surpassing the Ferrari driver late in the race, with Hamilton's Mercedes teammate Valtteri Bottas in third.

The victory is Hamilton's eighth British GP success at Silverstone, and puts him just eight points behind Verstappen in the Drivers' Championship.

His crash with Verstappen had earlier forced his rival to go to hospital.

The pair went wheel to wheel in the opening lap before they clashed at 180mph at Copse Corner.

A statement from the FIA on it read: "Following an incident during the FIA Formula 1 British Grand Prix today, 18/07/21, the driver of car #33, Max Verstappen, has been taken to a local hospital for further precautionary checks."

A Red Bull statement read: "Following an assessment by the trackside doctors at Silverstone Circuit Medical Centre, Max Verstappen has been taken to a local hospital for further precautionary tests."

The race was red-flagged following serious damage to the barriers on the exit of Copse.

The stewards announced they will be investigating the first-lap accident.

Leclerc assumed the lead of the race with Hamilton, having sustained damage to the front-left of his Mercedes, in second and Bottas third in the other Mercedes.

Back in the Mercedes garage, Hamilton watched a replay of the incident and shook his head.

“In that corner, he was never anywhere near alongside,” said a furious Horner. “Every driver that has driven this circuit knows that you do not stick a wheel on the inside of Copse. That is an enormous accident.

“And it was 100 per cent Max’s corner. As far as I am concerned, the full blame is on Hamilton who should never have been in that position.

“You could have had a massive accident. Thank God he walked away unscathed, so I hope you are going to deal with it appropriately.”

Hamilton’s Mercedes boss Toto Wolff then got in on the action with Masi.

The Austrian said: “Michael I have just sent you an email with the diagram with where the cars should be, did you receive it?”

Masi replied: “Toto, I don’t access my emails during the race deliberately so I can concentrate on the race.”

Wolff said: “Well, maybe you should look at this because there is something in the rules that is coming up.”

Masi then told Wolff to take his concerns up with the stewards.