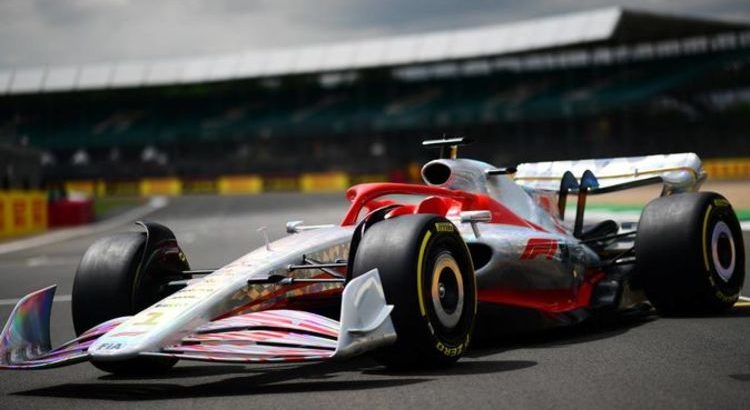 Title contenders Lewis Hamilton and Max Verstappen have today been given their first glimpses of the type of car they will be racing next season. Formula One has unveiled the prototype of its all-new car for the 2022 season, which organisers hope will increase competitiveness for racers and entertainment for fans.

The first full life-sized model was officially unveiled by F1 at Silverstone on Thursday, giving drivers and fans alike an idea of the future.

While the cars will retain the existing hybrid-turbo V6 engines, there are dramatic changes elsewhere.

Bigger tyres and scaled-back aerodynamics are the two main alterations, which, it is hoped, will encourage closer racing next season.

There are also simplified front and rear wings, a ground-effect floor and front wheel defectors to aid airflow over the new 18-inch tyres.

“The 2022 regulations from the FIA will create the conditions for closer racing where the cars can get closer to each other,” said F1 president and chief executive Stefano Domenicali.

“Elegant, streamlined and designed to race to the limit.”

“We want the best drivers to win but we want much closer competition. We want them battling wheel-to-wheel.”

While the thought process behind the alterations are guided by noble principles – fairness and entertainment – they will undoubtedly take some getting used to for drivers.

“Less downforce is always more difficult to drive. Those high-speed corners where, now, they are just bolted to the road basically… I think we are going to see a few more moments.

“And the cars these days, they are so on edge you can’t get a slide, whereas this: when there’s less about the downforce and more about the tyre, I think you’ll be getting some drifts here and there, which will be nice to see.”

F1’s Motorsports team have been working for a long time on the new design and have run around 7,500 simulations to get to this point.

It was developed in sessions at Sauber’s wind tunnel in Switzerland, with 138 baseline configurations experimented with over the past two years.

Another more subtle change comes with the fuel. Current regulations see cars running on fuel containing 5.75 per cent bio-components, but that will change to 10 per cent next year as the sport edges towards its goal of using fully sustainable fuel.