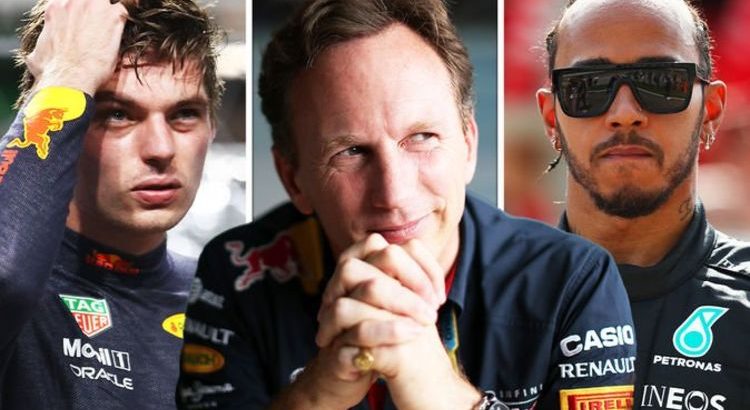 Lewis Hamilton and Max Verstappen’s fierce rivalry has been assessed by Red Bull boss Christian Horner, as he described their 2021 battle as the ‘best year’ Formula 1 has seen in ‘30 or 40 years’.

Hamilton and Verstappen played out a title race to remember last term, and after a remarkable battle throughout the season the chaotic finale in Abu Dhabi capped off a year of drama in style.

Verstappen was the man who prevailed following their 2021 battle, as he pipped Hamilton to the world championship on the very final lap of the season last month.

In typical Hamilton-Verstappen style though it wasn’t done without drama, as the Dutchman took advantage of a contentious safety car decision from FIA director Michael Masi to secure his first ever F1 title.

Following a quite remarkable year Horner believes that the pair’s incredible rivalry is providing Formula 1 with the best racing it has seen in a very long time.

JUST IN: Mercedes ‘could sue’ Lewis Hamilton if he retires from F1 but court battle unlikely

Speaking to Wion the Red Bull boss said: “I think sport is all about competition and when you’ve got serial winners it becomes less attractive.

“It was a fantastic year. It was the best year I think Formula 1 has had as a sport for probably 30 or 40 years.”

The remarkable finish in Abu Dhabi was no doubt a heartbreaking one for seven-time world champion Hamilton, as he was denied a record eighth title in somewhat controversial circumstances.

Following the race the Englishman has remained silent in the public eye and across all of his usually active social media pages, and this has led many to believe that he could well be considering retirement.

This also comes after his Mercedes boss Toto Wolff revealed that Hamilton had become ‘disillusioned’ with the sport following his contentious defeat, and with the new season just two months away, retirement rumours continue to grow.

One man who does want the Englishman back behind the wheel in 2022 though is his Red Bull rival Horner.

He added: “I certainly hope Lewis will be around this year. He’s still driving at an incredible level.

“The two drivers last year were in a league of their own.

“But ultimately it is his choice. It’s his career, it’s his decision so I’m sure he will decide to do what’s best for him, or what he wants to do and that is none of our business.”