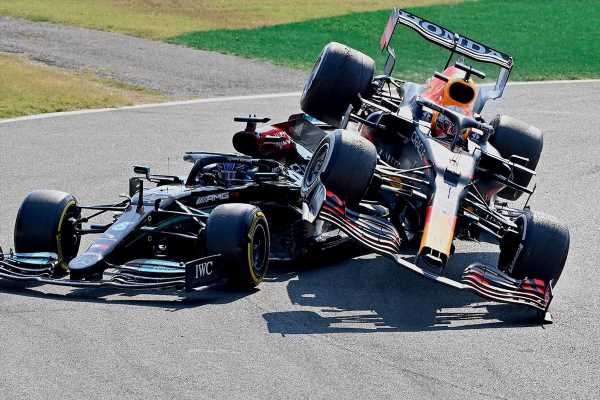 The pair crashed for a second time this season at the Italian Grand Prix on Sunday with Verstappen’s wheel landing on top of Hamilton’s car – the car halo saving the British star’s life.

They first came to blows at the British Grand Prix in July where the Dutchman ended up in hospital.

Wolff spoke after the Monza race, saying: “We don’t want to have situations in the future where one loses a position and the only way of stopping the other one scoring is to take him out.

“Both of them need to leave space for each other, race each other hard but avoid accidents.

“It was good fun until now, but we have seen the halo save Lewis’s life on Sunday and Max had a heavy impact in Silverstone and we don’t want to get to a situation where we intervene because someone gets really hurt.”

Verstappen, who received a three-grid penalty at the next grand prix for the crash, is currently five points ahead of Hamilton in the standings with neither driver picking up points at Monza.

Daniel Ricciardo won the race, his first title since 2018, but the focus was very much on the title rivals. Hamilton, who had neck pain after the crash, said afterwards he was lucky to be alive.

“Honestly, I feel very, very fortunate. Thank God for the halo. That ultimately saved me. And saved my neck,” the seven-time world champion said.

“I don’t think I have ever been hit on the head by a car before and it is quite a shock for me. If you see the image, my head is quite far forward. I have been racing for a long long time and I am so so grateful I am still here.

“I feel incredibly blessed that someone was watching over me today.”

The pair will once again race against each other at the Russian Grand Prix on 26 September.