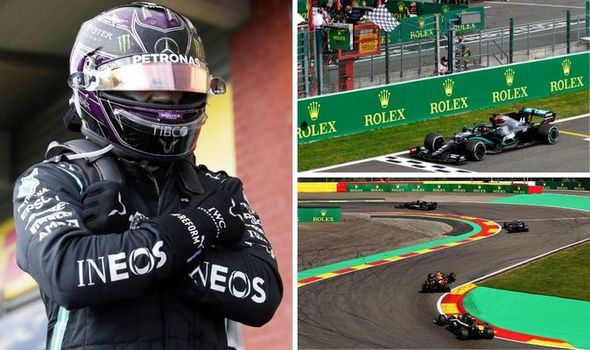 Lewis Hamilton insisted he feels better than ever after storming to a resounding victory at Sunday’s Belgian Grand Prix. The Mercedes driver put in a dominant performance at Circuit de Spa Francorchamps to extend his lead over Max Verstappen in the drivers’ standings to 47 points.

Following his 89th career win, Hamilton warned his and Mercedes’ superiority shows no sign of letting up with a seventh consecutive F1 title double in sight.

“I know it’s not necessarily what everyone always wants to see, the Mercedes at the front, but no matter how much success we have, we just keep our heads down,” said Hamilton.

“When I go back into the office now, there’s no guys celebrating. They’re like: ‘Okay, how can we win the next race?’ It’s an incredible mentality and environment to work around.

“We’re continuing to learn about ourselves, the car, how we develop and improve weekend-in, weekend-out. It’s crazy to think I’m 35, going towards 36, but I feel better than ever. That’s a positive.

“I’m really, really grateful to the team, everyone back at the factory. Thank you for their continued support.”

Hamilton’s fifth win of the season gave his aspirations a boost as he looks to match Michael Schumacher’s record haul of seven F1 titles.

Mercedes are now 106 points clear of Red Bull in the constructors’ stakes and look certain to claim those honours yet again this year.

Hamilton insisted, though, that there were a few nervy moments at Spa – with the tyre delamination drama which nearly wrecked his British Grand Prix hopes fresh in his memory.

“It wasn’t the easiest of races,” said Hamilton. “I had a lock up into Turn Five, which started to give a bit of a vibration and then one into the last corner.

“The tyre temperatures were slowly dropping, no matter how much you were pushing. As you lose rubber, you start to lose temperature in the tyres.

“It was a bit of a struggle. I was a little bit nervous that we might have a scenario like Silverstone with that right front [tyre] towards the end so I was nursing.

“It looks like the tyre’s got plenty of rubber on it, so maybe it was fine and I was all worried for nothing.”

Hamilton will continue his title charge next week as the relentless 2020 F1 season takes the Brit and his rivals to Monza for the Italian Grand Prix.