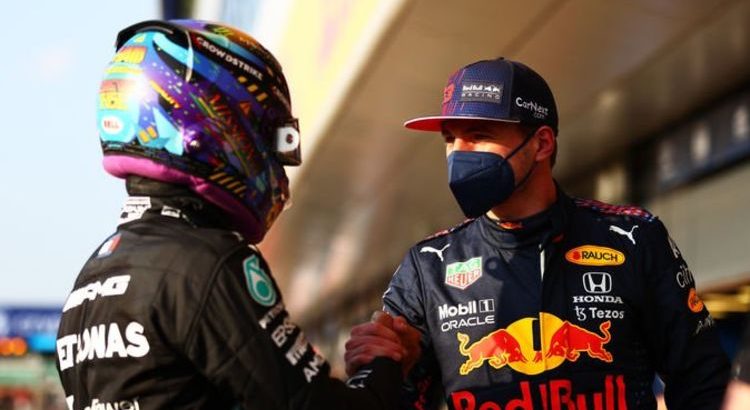 Lewis Hamilton won the British Grand Prix after colliding with Max Verstappen to cut the Dutchman’s championship lead to just eight points. Martin Brundle has given his analysis of the incident which saw the Red Bull driver taken to hospital for medical checks, suggesting Hamilton had decided pre-race he would not yield to his rival.

The 36-year-old received a 10-second time penalty but was able to claw back Charles Leclerc to ensure a dramatic win.

Hamilton and Verstappen have been engulfed in a war of words since but Brundle has not blamed either of them fully.

The Briton is now back in the title fight as Verstappen looks to stop him reaching eight world championships, one more than Michael Schumacher.

Brundle told Sky Sports: “Towards Copse, Max moved reasonably hard right and pinned Lewis, who had initially feigned left, towards the old pit wall perhaps certain in his mind that Lewis would yield as he approached a 180mph corner at an acute angle on the dirty side of the track.

“The day before in the Sprint, Lewis had been in a similar situation but on the outside and had to yield, costing him a chance of victory, and he had already decided not to make that mistake again.

“I believe he had also decided he had yielded too many times to Max’s aggression such as at Imola and Barcelona earlier in the year, and even the day before.

“He was 33 points behind in the championship and needed to make a stand against this fearless Dutch driving machine who wants his crown.

“Hamilton was momentarily largely alongside before he bailed out of the throttle. Max turned in feeling the corner was his and they touched, spinning him towards the barrier at high speed, finally stopping with the force of 51G.

“Thank goodness the car did not start rolling over, or a wheel bouncing into the marshal or even crowd enclosures.

“Hitting the barrier sideways hurts a lot, your ankles and knees can clatter together and your pelvis, ribs, shoulder and neck take a massive lateral load.

“Your head slaps into the headrest but thankfully that and crash helmet technology and design is good now.

“Red Bull felt it was a professional foul, an intentional accident from Hamilton.

“They were incandescent, their potential world champion was bruised, their car expensively wrecked in this new cost cap era, and with possible grid penalties to come from any engine and ancillary damage.”

F1 returns with the Hungarian Grand Prix on Sunday, August 1 as Hamilton looks to leapfrog Verstappen in the title fight.