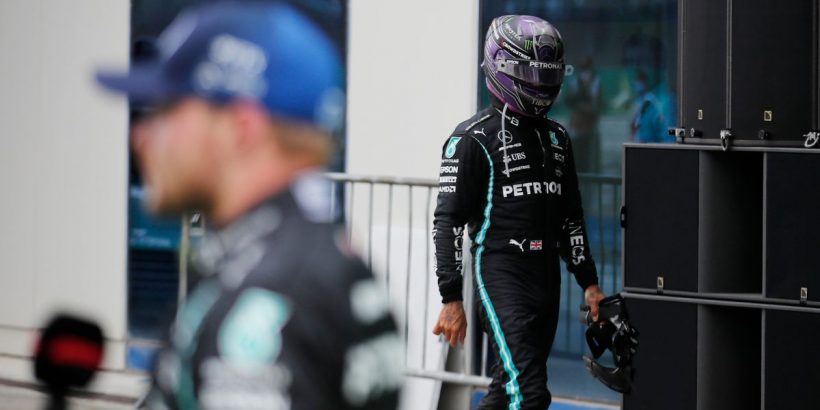 Valtteri Bottas produced a very accomplished performance to reign supreme at the Turkish Grand Prix, ahead of Max Verstappen in second and his title rival Lewis Hamilton in fifth.

While there was absolute delight for Bottas, the same certainly couldn't be said for Hamilton who was left raging as he again relinquished his lead in the title race with Verstappen.

Hamilton had started the day in 11th after a 10-place grid penalty for an engine change, and he had stormed up the field in Istanbul – in a race dominated by persistent drizzle.

However, with Hamilton third and with Verstappen in his sights in second, he was ordered to pit with just eight laps remaining for new intermediate tyres.

Hamilton was left fuming with the Mercedes decision to change his tyres, and made his feelings very much clear on the team radio after he fell six points behind Verstappen in the rollercoaster title race.

After pitting and heading back out to the track as he desperately tried to make up for the lost places, Hamilton could be heard fuming on his team radio: "F*** man, why did you give up that place?"

He could then later be heard shouting on the radio: "What position am I in man? We shouldn't have come in. I've got massive graining man. I told you."

Had Hamilton finished third, the position he was in before being brought into the pit lane, he would have ended the day one point behind Dutchman Verstappen in the title race.

But while Hamilton endured agony in Turkey, the Alfa Romeo-bound Bottas was obviously delighted with the win.

"It is not easy to choose the strategy, but I am glad everything went smoothly for once for me," said Bottas.

"It does not take much to go off in these conditions so I had to focus throughout the race."

And after finishing second, title leader Verstappen said: "It was not easy today. The track was very greasy and we had to manage the tyres.

"Valtteri had a little bit more pace but I am happy to finish second because in these conditions it is easy to get it wrong and drop back."

The F1 travelling party heads to the United States next, with a week's break before the Miami Grand Prix makes its debut on October 24.