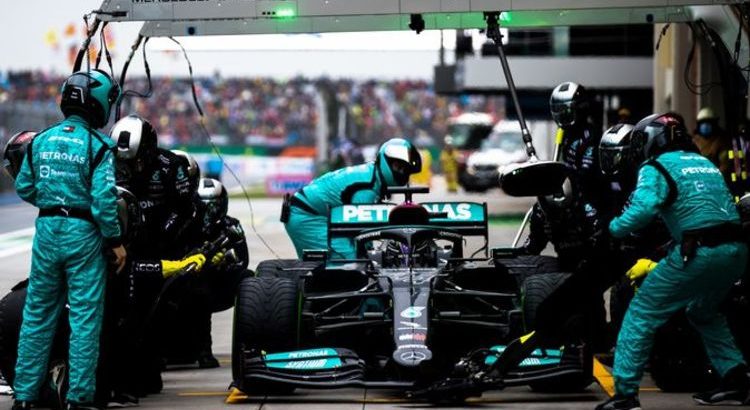 Lewis Hamilton took the unusual step of inspecting his own tyres post-race after a disappointing day at the Turkish Grand Prix. Despite having to start 11th on the grid for incurring a penalty for a fourth engine change of the season, the pace of Mercedes in qualifying meant the reigning world champion still harboured hopes of a podium finish.

And that scenario appeared within his grasp with just eight laps to go, with Hamilton only trailing title rival Max Verstappen and race leader Valtteri Bottas.

However it was then that Hamilton, who wanted to stay on the same set of intermediate tyres on which he started the race, was called into the pits by his team having earlier rejected several suggestions to change tyres.

He then re-emerged in fifth but rather than hunt down Charles Leclerc ahead of him, ended up desperately holding off Pierre Gasly to maintain that position.

The 36-year-old’s frustration was evident over team radio, as he argued: “We shouldn’t have come in, man. “I have massive graining. I told you.”

It was Bottas who secured a first F1 victory in 13 months, but a second placed finish for Verstappen, 24, meant that he left Istanbul with a six point lead in the drivers’ championship, when at one point it appeared he would just be one clear of Hamilton.

And after the race, Hamilton clearly felt his team had made the wrong call, going as far as inspecting his original tyres in the team garage.

His behaviour was picked up by the Sky Sports cameras, and Paul di Resta and Simon Lazenby noted how the tyres appeared bald to a dangerous extent.

“Lewis is going to look at those tyres,” said Di Resta.

Host Lazenby replied: “It’s not often we see that, Lewis going over and inspecting. Just look at those. Look at how worn they are. They were like slicks on one-half of the tyre.”

Di Resta then suggested that Mercedes made the right call, by refusing to risk Hamilton not finishing the race.

“Could you imagine the tyre failed on the last lap? You just don’t want to be pushing stuff like that when you’re fighting for a world title,” he continued.

“Sometimes you’ve got to surrender. Especially with so many twists and turns in this championship.”

Di Resta also acknowledged the intensity of the 2021 title race with still six races remaining this season, adding: “It’s on the edge of your seat stuff. It’s mega.”

Afterwards, Mercedes boss Toto Wolff defended the team’s decision, saying with hindsight Hamilton should have come in earlier on.

“The correct call would have probably been taking it very conservative and pitting when everybody else pitted for the intermediate, coming out behind Perez and probably behind Leclerc and fighting with them on track for P3,” he told Sky Sports.

Hamilton himself conceded things “could have been worse”.