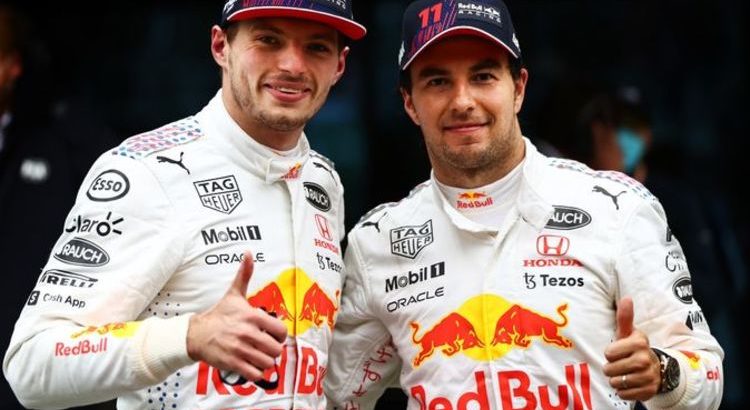 Max Verstappen said he would reward teammate Sergio Perez with tequilas after he superbly held up Lewis Hamilton during the Turkish GP. The Dutchman regained the lead in the driver’s championship after finishing second, while his Mercedes rival crossed the line in fifth following an error in judgment with his team.

Perez, who came third, engaged in a superb duel with Hamilton as the cars were wheel to wheel during the race.

It appeared as though the Brit had passed the Mexican around the outside as they negotiated the tough corners, but the Red Bull driver held his nerve superbly and was able to retain his place in front of the seven-time world champion.

During Verstappen’s interview with Sky Sports after the race, Perez interrupted and told his teammate and said: “You owe me a couple of tequilas!”

“I’ll get them to you in Mexico – before the weekend or after?” Verstappen asked, referring to Perez’s home Grand Prix in Mexico on November 7, to which he replied: “After!”

Verstappen would go on to talk about holding off Hamilton, whose Mercedes was rapid all weekend and his teammate Valtteri Bottas went on to secure his first win of the season.

“With Lewis, when he came I think I was at the worst stage of my race. I was degging off massively, and to defend him was pretty hard,” he continued.

“I think at that point Lewis is the fastest car on the track and [I’m] probably one of the slowest and really degging off with my tyres.

“He was already ahead, but I gave it a good shot into Turn 1 and managed to survive. I went through the wet patches and the car stuck in.”

Hamilton was left frustrated after Mercedes made a strategy call which saw the defending champion drop from third to fifth in the latter moments of the race, but admitted in “hindsight” he would’ve made a different decision.

Despite setting the fastest time in qualifying, the Brit took a 10-place grid penalty and began the race in 11th due to Mercedes changing his engine.

The silver arrows and Hamilton faced a tough call during the race, missing the key opportunity to pit their driver after the 36-year-old ignored the team’s call to come in for a new set of tyres.

With changing conditions, Hamilton felt the tyres he started on could get him to the end of the race, with his engineer Peter Bonnington asking the Mercedes driver to pit.

Eventually, in third place with seven laps remaining, Hamilton dove into the pits for a new set of intermediates, re-emerging in fifth place.

“So I was losing performance to the guys behind but I think probably in hindsight I should have either stayed out or come in much earlier because when you come in with eight laps to go, you don’t have time to go through the graining phase of that medium tyre on a drying track,” Hamilton explained.

“So then I went through this whole sliding phase where I nearly lost more positions so a bit frustrating but it is what it is.

“It felt good to be in third and I thought if I could just hold on to this, it’s a great result from 11th. Fifth is worse, but it could be worse.”

Formula One resumes in two weeks’ time for the USA Grand Prix with just six races remaining of what has been an enthralling season.