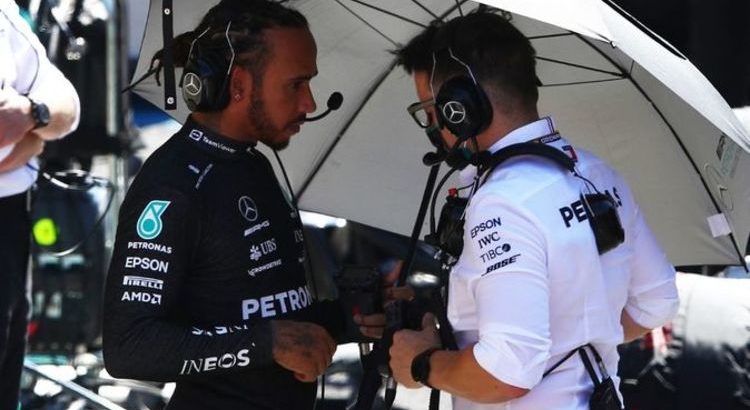 Mercedes believe Lewis Hamilton would never have finished the British Grand Prix had it not been for the red flag shown due to Max Verstappen’s crash with the seven-time world champion.

The pair collided at Turn Nine, Copse Corner, on the opening lap of the Grand Prix, with Hamilton applying pressure on the poleman to take the lead of his home race.

The Red Bull went cascading across the gravel trap and hit the tyre wall heavily, with any hope of a points finish dashed in seconds, with Hamilton picking up some damage to his front left.

Hamilton meanwhile went on to win the race, however incurred a ten-second penalty for causing a collision with the championship leader on the opening lap of the race.

The Dutchman was transferred to a local hospital for further checks, as Hamilton sliced his lead to just eight points with a controversial victory, which left Red Bull boss Christian Horner fuming at what he described as “dirty driving” from a “desperate” driver.

In the aftermath Mercedes’ head of trackside engineering Andrew Shovlin revealed the damage Hamilton had sustained would’ve been impossible to repair had the race not been suspended.

“We’d failed the rim where we’d had the contact at the front-left,” said Shovlin. “So that would have been a DNF [did not finish] had it not been red-flagged.”

As the cars headed back to the pits, Mercedes were able to repair the damage to Hamilton’s W12, but Shovlin added there was “actually remarkably little” else that needed to be fixed.

“There was a tyre temperature sensor that had got knocked loose so it was waggling around,” he said. “But amazingly, it’s the least important part on the front wing and it was the only one that broke.”

After serving his penalty, Hamilton rejoined in fifth and fought his way back to take the fight to the Ferrari driver, cheered on by his home fans, with cheers echoing around the Silverstone circuit.

“It is tough, I think, I’ve been giving my all this past week, just trying to uncover performance for this car with the guys and I’m so proud of everyone for just continuing to work, even though we’ve had a bit of a deficit,” Hamilton admitted after the race.

“Today, of course, always try to be measured in how I approach, particularly battling with Max, you know he’s very aggressive.

“I mean today, I was fully alongside him, and he didn’t leave me enough space but regardless of whether I agree with a penalty, I’d take it on the chin and I just kept working

“I was like I’m not gonna let anything get in the way of the crowd’s enjoyment of the weekend, and the national anthem, and a British flag.”