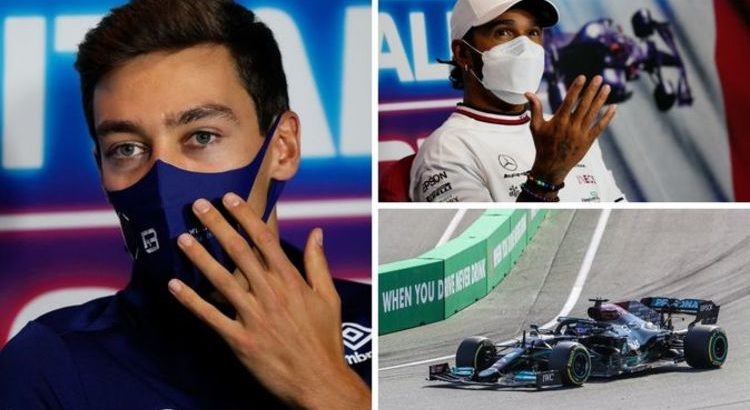 Mercedes new boy George Russell declared he will not play second fiddle to Lewis Hamilton in 2022. Earlier this week, the 23-year-old was finally confirmed as Valtteri Bottas’ replacement after months of speculation.

The Finn is heading to Alfa Romeo after the 2021 season concludes in Abu Dhabi, replacing Kimi Raikkonen who is set to retire at the end of the campaign.

Russell will therefore complete a mouth-watering and potentially explosive all-British driver line-up at Mercedes next season.

The current Williams driver has heaped praise on Hamilton, describing him as the greatest driver in the sport’s history.

While Russell clearly respects his future team-mate, he was assertive when asked about his role within the team.

“I am definitely going there on level terms,” Russell said in a Monza press conference ahead of Sunday’s Italian Grand Prix.

“That was made very clear to me. Mercedes is always respectful in giving both their drivers the best opportunity.

“I believe in myself and I have high aspirations. But equally I am under no illusions how tough it will be.

“We all know how strong Lewis is. He is the greatest driver of all-time, he is a seven-time world champion for a reason, so I am in a fortunate position to be able to learn from the best.”

The path from Williams to Mercedes is a well-trodden one in the last few years, with Bottas making the step up to replace Hamilton’s ally-turned-enemy Nico Rosberg, who won the 2016 world championship.

Bottas has been described by many as a compliant team-mate that incited little drama during his time with the team – a period in which the Silver Arrows won the constructors’ title for four straight years while Hamilton claimed four Drivers’ Championships.

For some, the promotion of the supremely-talented Russell poses a threat to the peaceful atmosphere that has helped Mercedes dominate F1 in recent years.

The German manufacturer are still clearly reeling from the three years of intra-team drama when Rosberg and Hamilton clashed for the title, ultimately leading to the deterioration of their relationship.

“Mercedes have had clear experience of a poor dynamic within the team, and they have made it absolutely clear that they don’t want a repeat,” Russell continued. “On a personal level, I don’t want that either.

“Lewis and I are at very different stages of our career which also helps. I have a huge amount of respect for him – being so much younger and looking up to him when I was in go-karting changes that dynamic, too.

“I don’t see there being any issues, and there is no reason why there should be any falling-outs. I am sure we will race each other with respect but race each other hard, just as Valtteri and Lewis have done.”

Hamilton – who had been vocal about Mercedes retaining Bottas – admitted he expects Russell to apply pressure on the him, and suggested the young star has nothing to lose as he will seek to establish himself within the team.

The meeting at Monza is the third race of a triple-header within the F1 calendar after the Belgian Grand Prix and the Dutch Grand Prix at Zandvoort occurred over the last two weekends.