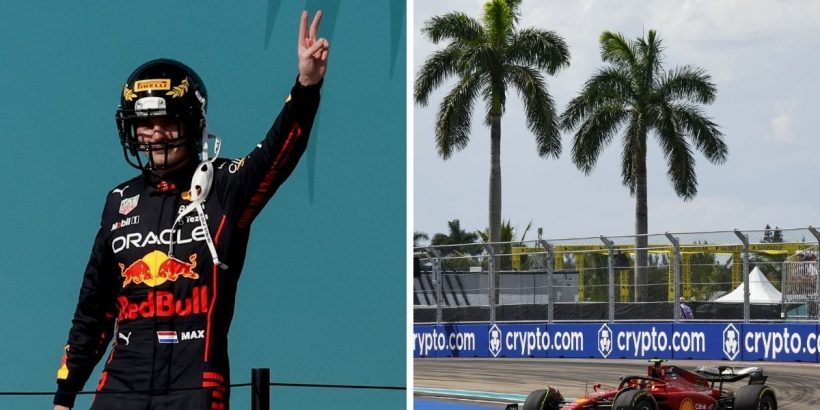 F1 preview: A lap of the Miami Grand Prix

Miami Grand Prix track designer Clive Bowen has revealed he felt embarrassed after a number of drivers complained about the circuit following its debut on the Formula 1 calendar last weekend. With celebrities galore, Red Bull’s Max Verstappen took the chequered flag to win the first race in Florida ahead of Ferrari’s Charles Leclerc.

The Miami Grand Prix was the next step for Liberty Media, as F1’s owners seek to market the sport towards its untapped American market. The success of Netflix’s docs-series Drive to Survive has seen the sport’s popularity soar in the United States, and F1 are desperate to take advantage.

From 2023, three races will be staged there once the Las Vegas Grand Prix joins the fold along with the Miami and Austin events. There was plenty of praise for the spectacle surrounding the 2022 Miami Grand Prix, but the Miami International Autodrome track – designed around the Miami Dolphins’ Hard Rock Stadium – was criticised by a number of drivers.

The most volatile area was the tight chicane around Turns 14 and 15, which the likes of Verstappen and Carlos Sainz deemed unsuitable for modern F1 cars. Seven-time world champion Lewis Hamilton compared it to a B&Q car park as Sainz and Alpine’s Esteban Ocon found the concrete there.

Miami Grand Prix managing partner Tom Garfinkel described the area as a ‘necessary evil’ in order to free up space for the rest of the track, but also to slow drivers down due to the lack of available run-off space. Drivers were also frustrated with the surface, with Red Bull’s Sergio Perez labelling the asphalt a ‘joke’ – which Apex Circuit Design boss Bowen took to heart.

“Actually, it was embarrassment on my part personally, because there’s a lot of time invested in getting this right,” Bowen told Motor Sport Magazine. “There’s professional pride involved isn’t there?

“It was the same at COTA, it was the same as Singapore, it was same at Istanbul when it was resurfaced. And so if you think of it from that perspective, it’s just a question of waiting for the track to mature. It’s a brand new piece of asphalt, and it needs to do its thing.”

Bowen says the issue surrounding the asphalt can be dealt with in the future by treating the track prior to the race to remove any debris and dust. He acknowledged this was an error in hindsight, but admitted officials will do the practice in 2023.

“Next year, we’ll start conditioning the track sooner with FOD BOSS, which is an electrostatic way of lifting debris off a circuit,” Bowen added. “So because it’s such an abrasive, rough surface, in fact all race tracks are, if you blow it, the little critters still sit in the valleys.

“If you sweep it, the same thing happens, you need to lift it vertically. And on Saturday morning, we started using the FOD BOSSes, and from that point forward, the track came to us.

“The one regret, I didn’t arrange for the FOD BOSS machines to do their work on the Thursday and the Friday. I just wish that I had made sure that they had run earlier.”

The 22-race F1 2022 campaign – which is expected to return to a record 23 races in the near future once a Russian Grand Prix replacement is found – continues with the Spanish Grand Prix in Barcelona on May 22.