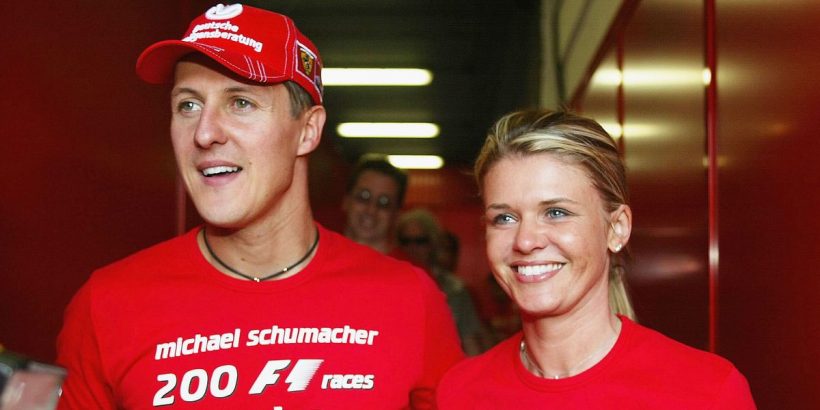 Michael Schumacher's wife Corinna has spoken about the beginning of her relationship with the seven-time Formula One World Drivers' Champion before their wedding in August of 1995.

Corinna, an accomplished horse rider and animal rights activist, has two children with Michael and has been by his side both before an after his 2013 skiing accident.

Michael had been skiing with his then-14-year-old son Mick above Meribel in the French Alps, and details of his condition have been kept private ahead of an upcoming Netflix documentary.

One previously unknown detail discussed by Corinna is the early stages of her relationship with the iconic driver, during which she described a chore he did on his birthday.

“He’s simply the most loveable person I’ve ever met,” she said as reported by The Mirror.

“I once made dinner for him on his birthday. He was the only one who helped me to clear up and do the dishes afterwards, and I thought, ‘That’s a proper bloke!”.

“I fell in love with him simply because he was a wonderful person. I just sensed that he was something special to me.”

Is Michael Schumacher the greatest F1 driver of all-time? Let us know in the comments section

Corinna also believes that Michael, who remains one of the most successful drivers in F1 history, had "guardian angels" watching out for him during his career.

She added: “We’d always made it through his races safely, which is why I was certain he had a few guardian angels that were keeping an eye out for him.

“I don’t know if it’s just a kind of protective wall that you put up yourself or if it’s because you’re in a way naive – but it simply never occurred to me that anything could ever happen to Michael.

“It [the accident] was just really bad luck – all the bad luck anyone could ever have in their life.”

Former Ferrari boss Jean Todt has offered a handful of updates in the eight years since the crash, most recently to German outlet Bild in August.

He said: "I’ve spent a lot of time with Corinna since Michael had his serious skiing accident.

"She is a great woman and leads the family," he added, referring to Schumacher’s wife.

"She didn’t expect that. It happened suddenly and she had no choice."