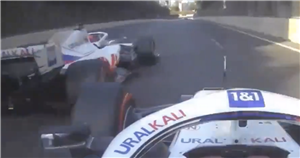 Michael Schumacher's son Mick fumed at Haas team-mate Nikita Mazepin at the Azerbaijan Grand Prix, yelling "does he want to kill us" over the radio.

The son of the seven-time F1 Drivers Champion finished 13th on the Baku course after a dramatic race which saw Max Verstappen and Lewis Hamilton crash out.

Mercedes' British racer skidded off the track at a restart with two laps to go, seeing him finish behind the Haas drivers.

But footage has emerged of the team-mates, who are yet to secure any points this season, clashing with each other on the track verbally.

In the clip, Mazepin – whose Russian billionaire dad owns the team – is going down the final straight of the course.

Schumacher, though, has extra speed from the slipstream and uses it to overtake on the right.

But his Haas team-mate does not move across to the left, slightly tightening the gap.

The German can be seen throwing his hands up in frustration towards the fellow Haas racer.

And it becomes a verbal volley after the pair cross the finish line.

"Honestly, seriously, does he want to kill us?! Wow, wow!"

When the footage was shared on Twitter, F1 fans were left shocked at the interaction on the track.

"This idiot will never learn," one said.

Another commented: "Mazepin is so far out of his depth in F1 it’s actually scary.

"Mick Schumacher is usually calm & composed, but even he’s clearly had enough of this idiot as his teammate."

While a third suggested Mazepin had hit a big nerve, with "Never heard Mick being this angry and that sweary."

For all the latest news, make sure you visit: dailystar.co.uk/sport/football

And you can stay up to date with all the must-see headlines, pictures, analysis, opinion and video on the stories that matter to you.