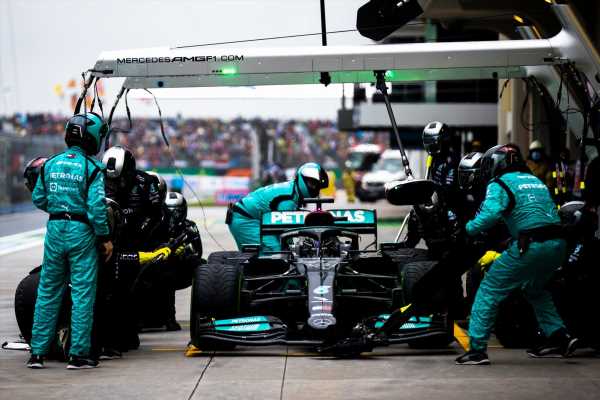 Mercedes made the decision to call Lewis Hamilton into the pits

Mercedes made the right decision to change Lewis Hamilton’s tyres during the closing stages of the Turkish Grand Prix as they would not have lasted until the end of the race, according to Pirelli.

Hamilton was furious after Mercedes went against his wishes and called him into the pits for new tyres with seven laps remaining. The seven-time world champion was in third and wanted to stay out on the same tyres he started the race on but ended up finishing fifth after his team took the safe option.

The Briton was further aggrieved after he discovering that Alpine’s Esteban Ocon had lasted all 58 laps on his starting set of intermediate tyres.

When asked whether Hamilton could have also made it to the end of the race, Pirelli’s head of Formula 1 Mario Isola told Sky Sports: “Looking at the tyres after the race, I would say no, or at least it was really at the limit.

“The wear of the tyres, especially at the end of the race, they were running basically on the construction. It was a bit dangerous to push the boundaries. But I fully understand that in race conditions they have to maximise their result.

“Every car is different, so the level of wear is different, also depending on how hard during the race they push. But more or less all the tyres had exposed cords, not only on Ocon’s car, most of the cars that stopped after lap 47/48 were completely finished.

“We know the new tarmac [in Istanbul] is more abrasive and has more grip compared to last year and the track was not dry but still abrasive. So it was really, really at the limit. I was suggesting to our allocated engineers to warn the teams to change the tyres and not to go to the end because it was a risky move.”

The result left Hamilton six points behind title rival Max Verstappen in the driver’s standings with six races of the season to go. With Verstappen finishing in second place behind race winner Valtteri Bottas, third place for Hamilton would have gap stand at just one point.

Mercedes team boss Toto Wolff said it was “clear” Hamilton wouldn’t have made it to the end on his starting tyres, even if his driver did not agree at the time.

“The intermediate obviously looked really scary, but we thought that we could maybe hang out there and finish third with not stopping,” Wolff said.

“So we balanced between pitting, taking it very conservative, fighting with Leclerc and Perez on the track for P3, or taking a little bit of a gamble and either winning or finishing third.