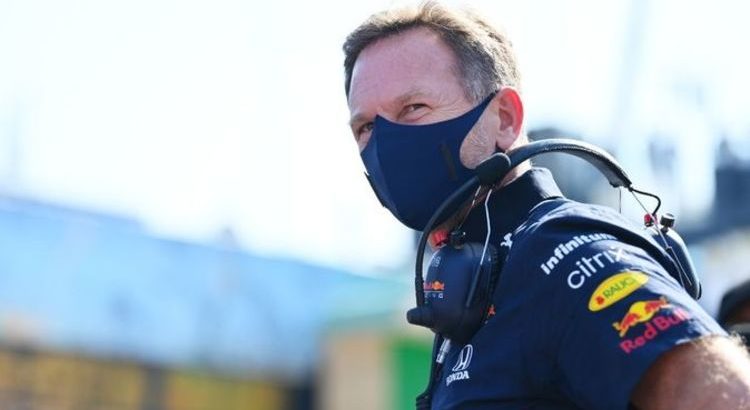 Red Bull boss Christian Horner says they are “disappointed” with the stewards’ decision to penalise Max Verstappen after he was deemed to have caused a collision with Lewis Hamilton at the Italian Grand Prix.

The two tangled as Hamilton was exiting the pits on lap 26 of the race, with the seven-time world champion taking the inside line into Turn 1 to defend against Verstappen, who bumped along kerbs and collided with the Briton.

The main title protagonists were both left stricken in the gravel, with the Red Bull planted on top of Hamilton’s Mercedes.

Verstappen was subsequently handed a three-place grid drop for the Russian Grand Prix, picking up his first penalty points of the season.

“We are disappointed with the three-place grid penalty, but accept the stewards’ decision,” said team boss Horner.

JUST IN:
Max Verstappen explains why he didn’t check in on Lewis Hamilton

“We felt what happened between Max and Lewis was a genuine racing incident.

“You can argue for both sides but ultimately it’s frustrating and disappointing to see both cars out of the race in what is proving to be an exciting championship.

“The main thing today is that the Halo ultimately did its job and certainly this isn’t the way we intended to finish the race.”

Both drivers were able to walk away from the crash, despite the dramatic nature of the incident, with Hamilton admitting he had a “sore neck” and a “headache” after the left rear of Verstappen’s Red Bull grazed his helmet in the impact.

Reacting to the decision, the news of which came as Hamilton was speaking to media, the Brit responded: “If that is the result then I think I am ultimately proud of the stewards.

“It definitely sets a precedent and I think it is important for us moving forwards for the safety of the drivers that there are strict rules set in place.”

However, the Dutchman was left questioning the stewards’ decision.

“I don’t fully agree with the penalty as I believe it was a racing incident,” said Verstappen. “It’s very unfortunate what happened today but we are both professionals and so we will move on.”

Verstappen still leads the way by five points heading to the Russian Grand Prix on 26 September, with the 23-year-old set to take his three-place grid drop in Sochi.

The race was eventually won by Daniel Ricciardo who put an end to McLaren’s nine-year wait for a win in Formula One, with his team-mate Lando Norris second on the podium.

Hamilton’s team-mate Valtteri Bottas meanwhile fought his way back from 19th on the grid to round up the top three on the podium.