Lewis Hamilton set himself for a fifth world title by qualifying third fastest for the Mexican Grand Prix.

The Mercedes driver only needs to finish seventh in Sunday’s race to be certain of equalling Juan Manuel Fangio’s championship record. 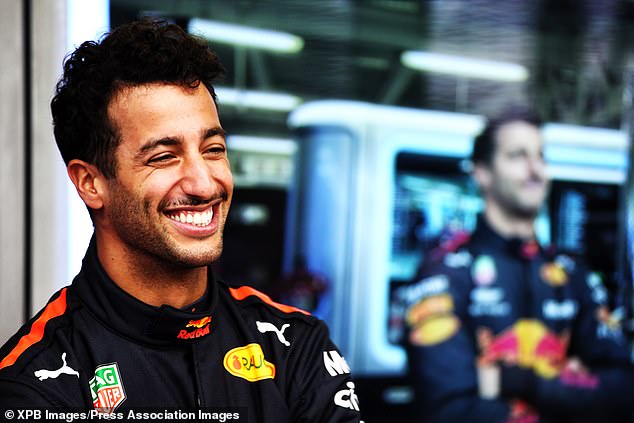 The title rivals will line up next to one another on the second row ?#MexicoGP ?? #F1 pic.twitter.com/QafdT1vkb1

Indeed, Hamilton was helped by the Red Bulls qualifying ahead of Sebastian Vettel, the Ferrari driver who is the only man who, mathematically, can prevent him taking title number five.

Vettel was fourth quickest. He needs to win the race to extend his interest in the title.

‘To be behind the Red Bulls is no bad thing,’ said Hamilton.

‘I am happy with qualifying after a bad day on Friday.’

Alluding to Vettel hitting him on the first lap last year, Hamilton added: ‘You saw what happened with the red car behind. We’ll see how we get away.’

Ricciardo sneaked into in front at the last minute, pipping Verstappen who looked as if he might have secured pole with his fast first lap. Verstappen had dominated practice.

It was Ricciardo’s first pole since Monte Carlo in May.

Some light relief at McLaren, where Fernando Alonso qualified 12th, the first time the Spaniard has escaped the first-session cull in four races.

Local favourite Sergio Perez was a place below Alonso despite the loud support of the crowd through the arena area of the track.