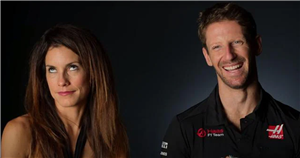 Romain Grosjean left his wife rolling her eyes after describing himself as the “man who walked out of fire”.

Grosjean somehow walked away after his Haas car collided with a barrier at last year’s Bahrain Grand Prix.

The Formula One machine was swiftly engulfed in fire though Haas managed to walk away with just minor burns.

He was treated in hospital for his injuries, being seen after the crash with bandages across his hands.

He has opened up on the incident for Netflix’s F1 documentary series Drive to Survive, and is interviewed alongside wife Marion.

Grosjean explained: “The impact was 56G, which means my body was about 3.9 tonnes.

“I was thinking ‘Where am I going to burn first? Is it going to be painful?’”

While Marion, who was watching the incident unfold, added: “The longer it went on, the more I thought he was going to be dead.”

Grosjean survived, though did lose his seat for the 2021 season, and has not lost his humour.

Calling himself the “man who walked out of fire” left Marion rolling her eyes at her beloved husband.

Grosjean had previously explained what went on inside the car at the time, saying: "I thought about Niki Lauda – the driver I love the most in the history of Formula 1. I said, 'I can't finish like Niki, I can't finish like this. It cannot be my last race'.

"So I tried again, I'm stuck. And then comes the part which is the most scary one. I sit back down, all my muscle relaxes, and I was almost at peace with myself, thinking, I'm dead. I will die.

"And then I thought, which part is going to burn first? Is it the foot? Is it the hands? Is it going to be painful? A very, very strange feeling.

“Sometimes we are close to death, we are a bit scared. This time death for me was here [Grosjean gesticulates to right in front of his face]. I named it Benoit, don't ask me why. I just had to put a name on it.

"Then I start to twist my head, go up and turn my body. It worked."