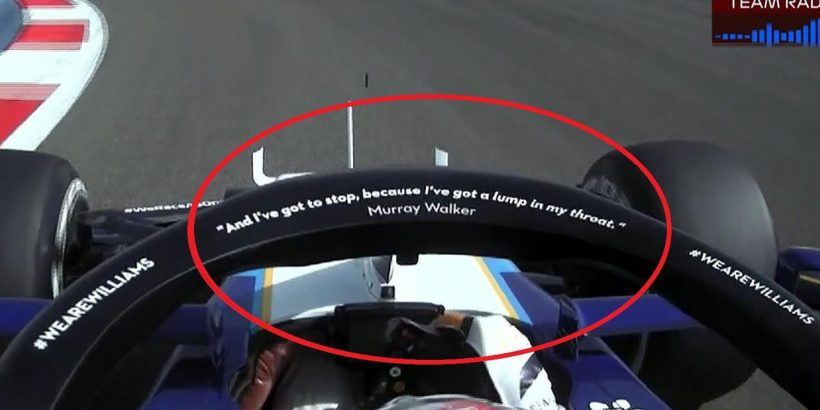 Formula 1 team Williams have paid tribute to motorsport icon Murray Walker in a message of pure class posted on their cars at the Bahrain Grand Prix.

Walker was famed for his Murrayisms and excitement behind the mic, as well as his emotion.

And Williams paid their respects by carrying his famous quote from when Damon Hill won the F1 title in 1996 while driving for the team, The Sun reports.

Videographic on pit stops during a Formula 1 Grand Prix. The Bahrain Grand Prix, the first of the 2021 season, takes place on Sunday. VIDEOGRAPHIC…

Videographic on pit stops during a Formula 1 Grand Prix. The Bahrain Grand Prix, the first of the 2021 season, takes place on Sunday. VIDEOGRAPHIC

The message on the car’s halo says, “And I have got to stop, because I’ve got a lump in my throat”.

The inscription is designed to be clearly visible from the television camera perched atop each F1 car.

Williams’ message was all class.Source:Twitter

Murray is also the man who made the phrase “Go, go, go at the Monaco Grand Prix” one of the most repeated sentences in the sport.

Fans reacted warmly when the message was first shown in Friday practice, one online deeming it ‘lovely’ and another wrote of how they were ‘thinking of marvellous Murray today’.

Meanwhile, Williams have confirmed that Formula 2 racer Dan Ticktum will continue as a development driver for this season.

— This story originally appeared on thesun.co.uk and has been republished with permission