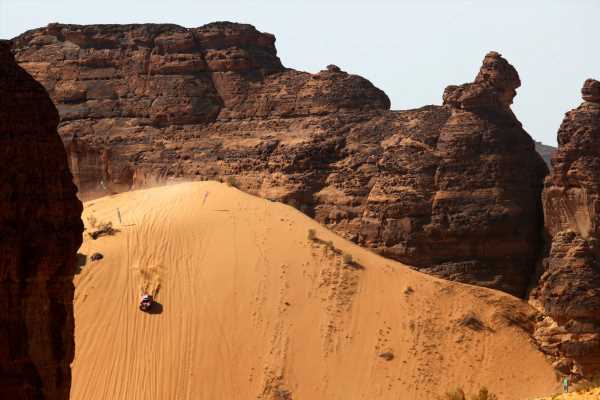 “It’s pretty insane,” says Jenson Button. He is talking about the sheer drop that lurks in the middle of this Desert X Prix circuit – something everyone has been talking about here in AlUla. The crest of the hill is essentially a blind approach, the kind that requires not just courage but no little faith. The drop is 100m from top to bottom at a 45 degree decline, in skiing parlance like launching down a super-black run, except you’re not on skis but sitting inside a 1.78 ton SUV.

“The first time I was like ‘wooooah!’,” says Button, miming the sort of grimace you might see on a man who overestimated his tolerance for rollercoasters. “But it’s good fun and it’s going to make for some great TV, and that’s what it’s all about really, putting on a good show.”

Button is driving for his own JBXE team in Extreme E, a new five-race series in remote locations from the Amazon rainforest to the Arctic ice, aiming to raise awareness of the climate crisis as it goes. This first destination is Saudi Arabia’s AlUla desert which provides a stunning backdrop of giant sandstone rock. The brutal 9km circuit which weaves its way through the valley tests every possible limit of the Odyssey 21 electric race car, which each male-and-female pairing takes in turn to drive.

So what does it feel like to be behind the wheel of an Extreme E car? “Very light steering,” Button says with a look that reveals his surprise. He is standing outside a makeshift paddock where each team has their own tent, more akin to a music festival than a racetrack, as the Saudi Arabian sun sets on an action-packed qualifying day. What is so refreshing about the F1 world champion is that he openly admits to being well outside his comfort zone.

“It’s definitely different,” Button says. “For me, the big thing is seat position. It’s so weird. In a race car in a single seater you’re lying down, basically. In this you’re upright, like you’re driving a bus. So it’s very different, it takes a while to get used to. I’m still not there but it’s been a lot of fun.”

Button and teammate Mikaela Ahlin-Kottulinsky have endured a challenging weekend so far with mechanical issues during Friday’s shakedown and more of the same during qualifying. They finished sixth of the nine teams, meaning they go into Sunday morning’s wheel-to-wheel racing still with a chance of qualifying for the afternoon’s three-car final.

“There’s still a lot of work to do for us to improve. These guys [he points to his JBXE mechanics], the first time they touched the car was on Tuesday. So there’s a lot of improvements we need to make, but we’re getting there.”

Slowly JBXE are finding their feet, in tandem with Button himself as he continues to push his own boundaries. He is quickly learning about himself, the car and this punishing course. So will there still be butterflies in his stomach when he tips over the top tomorrow? “Yeah, definitely! Definitely.”