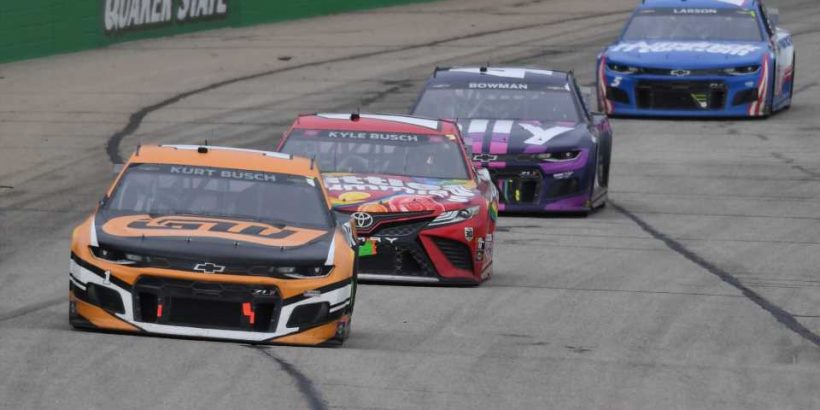 The winner of Sunday’s NASCAR Cup Series race at Atlanta Motor Speedway dueled with a driver he knows extremely well.

Kurt Busch held off younger brother Kyle Busch to the checkered flag at the Quaker State 400 presented by Walmart. The win locked Kurt Busch into NASCAR’s playoffs. His brother qualified in May when he won the Buschy McBusch Race 400 at Kansas.

The driver of the Chip Ganassi Racing No. 1 car was ecstatic after outrunning his sibling rival.

Below is more about Kurt Busch’s win Sunday, plus the complete results of the race.

Who won the NASCAR race yesterday?

Kurt Busch got the better of brother Kyle Busch in a duel to the finish. The showdown left him feeling . . . sentimental?

“The adrenaline gets going, the childhood memories come back, the best of the best in this business is in my mirror, and yet I can giggle to myself sometimes and go, ‘Yeah, I taught him everything he knows,'” he said in his postrace press conference. “It’s an awesome, genuine battle between the two of us.

“We’ve had some friction over the years, but as we get older (Kurt is 42, Kyle is 36), we’ve gotten slightly a bit wiser and we’ve raced each other with a ton of respect on track, to almost be teammates even though we race for different organizations.”

Kurt Busch also said that he and his brother have become very close over the past year because of having to spend more time together during the COVID-19 pandemic.

Kyle Busch wasn’t happy about finishing second, but he still congratulated the winner.

He certainly was unhappy with Ross Chastain, Kurt Busch’s teammate at Chip Ganassi Racing. Chastain was just ahead as the Busch brothers as they raced for the lead in the closing laps, and Kyle Busch thought Chastain held him up. Kurt Busch passed his brother, who was forced to use up his tires with Chastain in front of him.

“Shows you what kind of driver he is,” Kyle Busch told NBCSN.

“Chastain helped today from the teammate side,” Kurt Busch said. “It’s my brother. He can take one. Sit on the side. It’s all right, buddy, you can finish second.”

“Racing to stay on the lead lap, I’m very aware of what’s going on on the track around me. Kurt asked for the bottom and I gave it to him,” Chastain told NBCSN.

The Busch brothers have finished 1-2 four times in the Cup Series. Each has won twice. They also split the first two stages of Sunday’s race; Kyle won Stage 1 and Kurt won Stage 2.

The rest of the top five at Atlanta: Martin Truex Jr., Alex Bowman and Ryan Blaney.

Denny Hamlin kept his lead in the point standings with a 13th-place finish. He still is without a win, however. Kurt Busch is the 12th different driver to win in the first 21 races this season.

NASCAR is going north for next weekend’s race, the Foxwoods Resort Casino 301 at New Hampshire Motor Speedway (3 p.m. ET Sunday; NBCSN, TSN, PRN, SiriusXM NASCAR Radio). The series will then take the next two weeks off as the Summer Olympics proceed.