NSW have lost the unloseable series as a Maroons side that blooded 14 players across three games held on to win a dramatic, torrid and unforgettable decider 20-14 at Suncorp Stadium.

Derided as the worst team to ever don the Queensland jersey, the home side ran out to a 20-6 lead before NSW soared back into the contest to have one final roll of the dice against a 12-man Maroons outfit in the closing minutes. 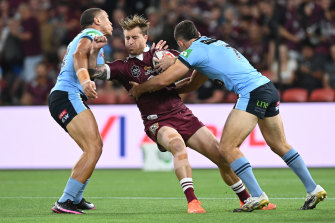 Wally Lewis Medal winner Cameron Munster had a night to remember for Queensland.Credit:Getty

It was 6-6 at that point and the Maroons were already squarely in the contest. They looked like a completely different side from the limp, flat group in Sydney and were asking questions in attack and pouring on the pain with some thunderous defence.

But losing a player of Tedesco's stature, quality and creativity was an immense blow for NSW; he'd already scored their first try. But he stumbled almost as soon as he was hauled to his feet and this time, there would be no question about a possible return to play.

Jai Arrow's actions after the contact didn't help and NSW were fuming when they saw the replay on the big screen. He lifted up Tedesco, who already heavily concussed, before dropping him back to the turf. He seemed to realise the gravity of what he did soon after as he called for help for the stricken Blues star but the vision was damning.

That prompted NSW to send Clint Gutherson to fullback and Isaah Yeo to the centres, while the Maroons were starting to assert their control through the middle and the play of Munster, whose genius was growing with each and every touch, of which there were many. 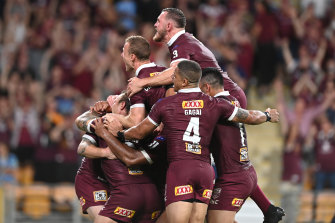 With nothing on in the 37th minute, he kicked for himself, regathered, then kicked again. He went to first receiver for the following play then kicked wide for Edrick Lee to eventually regather and dive over for a try on debut.

That was good enough for a 12-6 lead at half-time and the Blues would have been reasonably happy with that given the growing dominance from their opposition. Nathan Cleary had tried his best to keep them in it with his long kicking game but, unlike game two, he was being pressured and chopped down after every heave.

The Blues needed the narrative to change after the break but Queensland only seemed to grow an extra leg. Grant was wonderful after being introduced in the 25-minute mark by Bennett, carving up NSW through the middle on multiple occasions to put his side on the front foot.

NSW lacked nothing in courage and their goal-line defence somehow managed to hold after set after set of Maroon attacks. They repelled them enough times to see Valentine Holmes resort to a penalty and a 14-6 lead with just over 20 minutes left on the clock.

In Grant, a star was born. He showed such quality in his first NRL season for the Tigers that his performance on the grand stage was barely a surprise. He managed to burrow his way over for a try after 62 minutes to give Queensland a 20-6 lead and from there, it looked a bridge too far for the battered Blues.

Yet Origin loves to live up to its own cliches and it truly is never a done deal until the final siren. The first time NSW had a decent look at the Queensland line for the entire half saw them stroll over through Daniel Tupou and suddenly, there was a spring in their step.

Holmes bombed what looked like a certain try down the left edge that would have been curtains for NSW and NSW replied with a penalty right in front from Cleary, bringing the Blues within six at the eight-minute mark. Now Fittler, who had spent much of the night shaking his head on the bench, was up and about.

Walker was out cold after the tackle on Daly Cherry-Evans and Queensland had the chance to regroup and close it out. Instead, NSW found themselves attacking a 12-man line after Corey Allan was sin-binned for impeding the kick chase of Josh Addo-Carr. It wasn't to be.